April 17, 2009 at 1:21 PM
comment
Employing the same sort of logic that St. Louis alderman Quincy Troupe used when he suggested earlier this year that every north St. Louisan should pack a pistol in order protect themselves from crime, the Missouri House of Representatives gave final passage yesterday to an amendment that would allow college students to carry concealed weapons on campus and in classrooms.
Ironically, 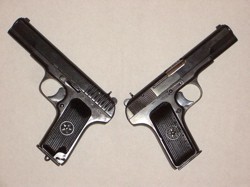 Exactly two years after a gunman killed 32 people and himself on the campus of Virginia Tech, the Missouri House voted Thursday to allow concealed weapons on college campuses.

An amendment to a proposed gun bill, which was approved 105-50 Thursday, would pertain only to gun owners who are properly licensed in the state. The bill will now move to the state Senate for consideration.

Republicans speaking in favor of the concealed-carry amendment said college students have a right to defend themselves from violent people who would disregard designated gun-free zones.

The presidents of Mizzou, Missouri State, and Rockhurst have uniformly criticized the measure, because, after all, if you have a well-armed undergrad population roaming the halls of learning, what could possibly go wrong?