Cherokee Street at Texas Avenue: A Lot of Contention

April 16, 2009 at 3:53 PM
comment
On any other empty lot, the delivery last Friday of a heap of compost and pile of mulch would equal one robust mound of "who gives a doodle." Not the case at the southeast corner of Cherokee Street and Texas Avenue, where some are clamoring for a community garden but haven't gotten the nod from the lot's owner: the City of St. Louis.

"Somebody got the cart before the horse," says Alderman Ken Ortmann, in whose Ninth Ward the vacant lot is located.

The conflict began to take root last October, when the nuns who run the Incarnate Word Foundation put out a call for proposals:

"What innovation in how we live, work, and play together would strengthen our neighborhood? How can we have the greatest impact on the Benton Park West neighborhood and surrounding areas?"

Residents of the neighborhood would be invited to vote, the foundation declared, and the plan that received the most votes would be awarded a $25,000 grant.

Voting took place in January. The winning project was spearheaded by community organizer Lyndsey Scott. Her plan centered on the the lot at Cherokee and Texas, which she wanted to turn into an "interactive plaza" that would provide space for neighborly encounters and programming for children.

Scott showed up at the March neighborhood association meetings of Benton Park West and Gravois Park armed with a PowerPoint presentation.

Soon thereafter, the presidents of two neighborhood associations weighed in against Scott's proposal. Bill Byrd of Benton Park West objected in an April 2 letter that the project "should be in a central location in Benton Park West," and that "a majority of residents [from that neighborhood] would not benefit" from a plaza at Cherokee and Texas.

The same day, Rita Ford, president of Gravois Park's neighborhood association, wrote a letter referring to Scott's proposal as "an adult playground...that would create a nightmare for the commercial district."

(These two letters, now posted on www.cherokeestreetnews.org, have drawn a batch of angry comments from some visitors to that website.)

The Cherokee Station Business Association, however, has endorsed the project, on the grounds that it "would add to the eclectic ambiance and urban feel, which is the foundation for the renaissance that Cherokee Street is currently experiencing." 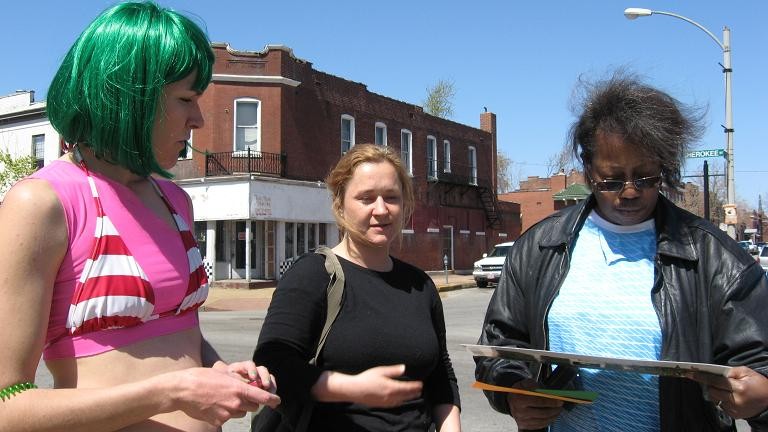 In a provocative stratagem, Scott and other pro-plaza forces gathered at the lot on April 4 to pass out fliers and talk up their project to passers-by. For the occasion, Scott donned a bright-green wig.

Two weeks later, Scott and her cohorts have reworked their proposal: They want to lease the lot from the city as a garden space. Scott calls this new plan "a season-long good faith experiment."

(St. Louis' LRA office did not return repeated phone calls inquiring about the possibility of such a lease.)

Rita Ford is not hopeful. "They're beautiful people and they want to do beautiful things," she says of Scott and her allies. But Ford remains skeptical that a garden would be maintained and protected. She also says there's already too much "panhandling and drinking" on that corner, and a commons would only make matters worse. "We got a lot of cleaning up to do, and I'm not saying it can never happen, but right now is not the time for a garden there."

Counters Scott: "Cops and neighborhood-stabilization programs are one strategy, but there are other strategies." Rather than sit in nighttime neighborhood association meetings discussing "undesirables," she says, she prefers to move the "point of action" to the street level.

She believes that a green commons where people could garden, play games and meet one another, would create a "high-visibility corner where connections and compassion are available."

In order to become a reality, Scott's vision would require the approval of Alderman Ken Ortmann. Ortmann declined to endorse Scott's plaza idea. "I will not support a not-for-profit on this lot," he says, "because Cherokee street is a taxing district and [such an organization] doesn't contribute."

Ortmann says he may try to organize a work day to improve the lot. "I think we can make it look better," he allows. "But if I have a developer that wants to build on it, I want it to be available. I'm not giving up possession of that lot."

The delivery of mulch and compost, Ortmann adds, was an honest misunderstanding. A party he declined to name apparently ordered it from the city's Forestry Division, but he has already asked the city to come back and pick it up.

In the meantime, Bridget Flood, executive director of the Incarnate Word Foundation, says the $25,000 grant award is on hold. "The groups in the neighborhood are in dialogue about what to do," Flood says. "We're going to wait and see how the dialogues turn out."

Postscript: [Lyndsey Scott and the lot at Cherokee and Texas have a bit of a history; for details see this story from 2006.]