Unreal is excited beyond all reason: The Whig Party is back! (These political Whigs, by the way, are not to be confused with either the band The Whigs or the other band The Afghan Whigs.)

Actually, the Whigs have been back since 2007, when a group of Iraq and Afghanistan vets got together and decided that the Republicans and Democrats weren't paying sufficient attention to their issues, and also that the current two-party system sucked.

Since then, the modern Whigs have been expanding across the country. Last month the spanking-new Missouri chapter convened at Prison Brews Restaurant, a microbrewery in Jefferson City. If anyplace ever deserved a historical plaque, it would be Prison Brews Restaurant, so for that reason, Unreal wishes the greatest success for the Modern Whig party.

Today Rhonda Carsten, spokeswoman for the Missouri Whigs, took a few moments to talk to us about her new party.

She could not answer our most burning question, which was why the Whig Party got to be resurrected instead of the the Free-Soilers, the Bull Moose or (our personal favorite) the Know-Nothings. But she did apologize for the state of the Missouri Whigs' website and promised she would use all her skills honed from her career as a professional writer to fix it.


"I got involved with the Whigs in September," she tells us. "I liked the Pickens Plan. You know T. Boone Pickens' ads on TV? He wants to change the way Americans get their energy. The Whigs endorse the Pickens plan.

"The modern Whigs liked the values and platform of the Whigs of the 19th century. They opposed Andrew Jackson and were for state's rights. Andrew Jackson offended a lot of people. They called him King Andrew, right? Though when you talk to the general public about 19th century history, most of them are like, 'Eh.' 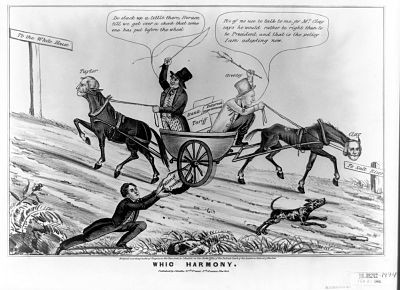 "The Whigs are strong on national defense and are fiscally conservative and socially liberal. We're not offended by gay marriage. But we want to find solutions to problems that can be solved through politics. We don't want to get hung up on hot-button issues. They get in the way.

"It's not like in four or six or eight years we're going to try to run somebody for President. We're aware of what happens to third parties. It's pretty tough.

"Abraham Lincoln was a Whig before he was a Republican. I'm a relative of Lincoln. A cousin or something. One of my people made it onto money. I need to do more for my country."