April is the Coolest Month: Bloom Explosion in Forest Park 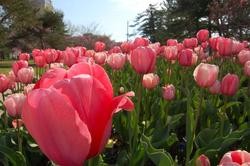 As you read this, the crab apple and redbud trees in Forest Park are positively bursting over entire brigades of tulips and daffodils. But according to the park's horticultural foreman, Alan Jankowski, you've only got about two weeks left to enjoy them.

Click on the map markers below to view some lovely specimens in the park's northeast corner (then follow the arrow to see a few more).

WHERE STUFF IS BLOOMING

Too lazy/frightened to use a Google map? Here are some of the photos (garnished with a lil' bit of Chaucer to getcha in the mood):

When that April with his showers soote [i.e., sweet]...

...the drought of March hath perced to the roote...

...and bathed every vein in such liquor...

...of which virtue engendered is the flower...