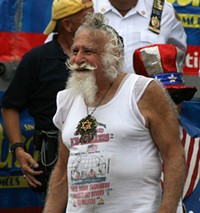 Just in time for Passover, Newsweek has revealed its list of the 50 hottest rabbis in America. (We don't see the connection between Passover and rabbinical hotness, either. Butanyway.)

"Hotness" in this case refers to influence, alas, not personal appearance. The hottest rabbi in America right now is Rabbi David Saperstein, Director of the Religious Action Center and the Co-Chair of the Coalition to Preserve Religious Liberty, and, more significantly, a Friend of Obama.

None of St. Louis' rabbis made the list. But they shouldn't feel too bad. Cousin of Obama Rabbi Capers Funnye didn't make the list, either.

But -- Central Reform Congregation in the Central West End (and, incidentally, the only synagogue within the city limits) made the Web exclusive list of America's 25 Most Vibrant Congregations: "St. Louis's only congregation strives to capture the attention and the involvement of its diverse community."

CRC will celebrate its 25th birthday later this month.

Unreal visited CRC's Purim celebration last year when Rabbi Randy Fleisher dressed up as Fruma Sarah, a Jewish girl hungry for knowledge, and says that if the hot rabbi list had referred to physical appearance, Fleisher would have been a lock.