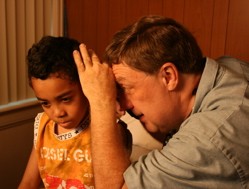 Sad news in the St. Louis medical and Hispanic communities today, as the Post-Dispatch reports that La Clinica, the free, multilingual health care center located just off of South Grand in the Scruggs Church, will be closing later this month due to a lack of funding.
The facility, which offers everything from pre-natal to dental care at a cost of just $20 per patient, has always struggled to make ends meet.
In the past, costs were cut by using free drug samples from pharmaceutical companies in lieu of prescriptions to treat patients, many of whom are undocumented immigrants. (See this RFT story from 2007 for more on that practice.)
The clinic was founded in 1995 by William Chignoli (the subject of last week's RFT feature story), who eventually left his post as executive director in 2005 due to financial woes.
Reached by phone this morning, Chignoli had this to say about La Clinica's demise: "It's absolutely sad. La Clinica not only is a very good health center professionally speaking, also they create necessity for other health centers to have cultural proficiency. It was an outstanding example of community health center. I don't know what's going to happen now."
It's unclear where the thousand of uninsured and undocumented Hispanic and Vietnamese immigrants who rely on La Clinica in times of need will turn for health care.
No matter what your stance is on illegal immigration, it's difficult to deny that institutions such as La Clinica benefit the community. Not only are insurance and health care costs reduced for everyone when the uninsured have a place such as La Clinica to turn to, the needy are able to get the health care they deserve. And with many medical students and top physicians in the area volunteering their skills, that care was often outstanding.
The listed number for La Clinica is now disconnected. Members of La Clinica's board of directors could not be reached for comment.
Check the Daily RFT for updates, including information about any last ditch fund-raising attempts, as they develop.