George didn't show at Busch Stadium for Opening Day. Perhaps too pooped from a midnight shoot in Lafayette Square over the weekend?

A house on Whittemore Place in the swishy near-downtown neighborhood was the scene of some Up in the Air shooting Friday night. Late, I'm told -- like after midnight.

Resident and photographer Sandy Herde was there taking her own shots. (See one to the right and more after the jump.) Here's her rundown of the events:

Winter scene in Chicago. George drives up, gets out of the car, rings the door bell, then talks to the lead female character (Vera Farmiga) in the front hall. They [the film crew] covered several yards to each side of the house with fake snow. Just before shooting they covered the street with actual chipped ice.

Apparently the Lafayette Square homeowners got a knock on their doors one day a few months ago and were asked by some scouts if they'd be willing to have their house in the movie. 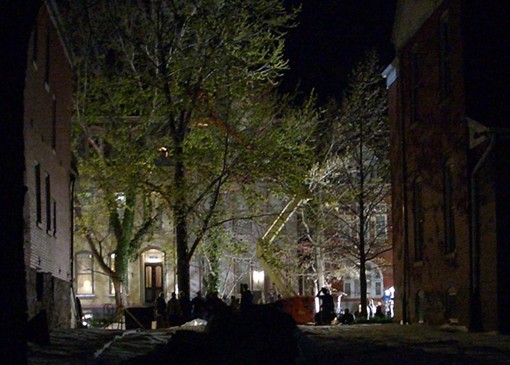 And, no, I am most certainly *not* stalking Georgie Boy. This time, I was nowhere near the vicinity.