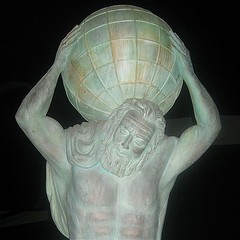 Now that's more what I'm talking about. The Blues looked overmatched in Chicago. They looked much, much better on Thursday night in Detroit.
Of all the players we've seen make big contributions to the Blues' cause here the last couple of months, David Backes has probably gotten the least credit. T.J. Oshie is quickly becoming something of a matinee idol here in St. Louis. David Perron and Patrick Berglund routinely get mentioned in those hypothetical conversations people have about, "which player would you want to build a team around?" Backes, though, just doesn't seem to get a whole lot of respect.
And trust me, I know that I'm just as guilty of it as anyone; I mention Perron, Berglund, and Oshie in the same tones the Catholics use for their own Holy Trinity, and just about as often, too. Backes, though? Meh. He just doesn't seem to generate the same kind of headline material on a nightly basis.
What he does do, though, is provide an outstanding complement to the rest of the youth on this Blues team. The Blues are a tough, aggressive squad when they're playing well, but they still aren't the biggest team, at least on the offensive end.

Keith Tkachuk is the only player on the team that really fits that prototypical power forward mold; Brad Winchester and D.J. King are both big enough, but neither are really your big time skill sort of players. Of the three young guys who get so much ink in this space, Berglund is plenty tall, at 6'4", but isn't built for power, necessarily, weighing in at right around 190 pounds. He may fill out some as he ages, yes, but his frame is really more that long, lean sort of build you usually see in pitchers.

Backes does fit the mold of the power forward, at 6'3", 216 pounds. He's got the hands, though you maybe don't notice them quite as quickly as you do with a guy like a Perron.

Backes also has a really nice mean streak in him; like several of these other young guys, he's not at all afraid of mixing it up along the boards.

And most importantly, Backes is just starting to learn what it means to be a finisher in the National Hockey League.
With those four goals last night, Backes jumped into a tie with Brad Boyes for the goals scored lead on the Blues. Now, sure, four goals in a game has a way of bumping your overall stat line up in a big-ass rush, but I'll bet very few people even realized he was anywhere near the scorer that Boyes is.
After last night, though, I'll bet that all probably changes. That was just the sort of game that can propel a young player into prominence in a hurry. The Blues badly needed to get at least a point; Backes put them on his back and just carried them to the win. The win put the Blue Note back into a playoff spot, one point ahead of ninth-place Nashville and just one behind Anaheim. (Actually, the win briefly put them back into seventh, but the Ducks took care of their business as well.)
In a season full of tremendous performances, the one that Backes turned in last night was one for the ages. In fact, it may have been the single biggest performance of the entire season, coming as it did at such a critical juncture.
So to David Backes, I say congratulations, and I promise to try and give you more space in these pages, though I honestly kind of doubt that I'll be able to hold to that very well. But hey, when a man scores four in a game like that (and it probably should have been five), he probably doesn't care much about what an internet hack has to say about him anyway.
Four games to go.