Church Plans "Easter In Octagon"; Says Pastor: "Jesus Didn't Tap Out, He was an Ultimate Fighter."

April 03, 2009 at 3:42 PM
comment
Ah, the traditional rite of spring that is Easter: The resurrection of Christ, a nice bouquet of flowers, a brunch buffet...and a roundhouse kick to the face?
Yup, that's what the congregation at the Spirit of St. Louis Church in Arnold can expect next weekend. The church and its pastor Tom Skiles are hosting "Easter In the Octagon: The Ultimate Fighter."
Needless to say, it's not your grandma's Easter service.
"For years the church has taught us to be "the nice guy" when we have really been called to be Ultimate Fighters," says the flyer on the church's Web site. "But what do we fight for? Join us on Easter and throughout April, as we "jump into the Octagon of Life" and learn how to be the 'The Ultimate Fighter!'"
We called up Pastor Tom to confirm that this is not an April Fool's joke and find what, exactly, the sport that's been called "human dogfighting" has to do with Jesus' return from the grave. 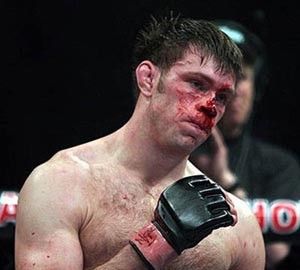 RFT: How did you get this idea? Do you follow pro MMA, ultimate fighting and all that?
Pastor Tom: Yeah, we watch it pretty closely. I'm not religious with it, but I enjoy how it's overtaken boxing. We Pay Per View it a lot. I don't see anything wrong with it, especially since they put on gloves. It's not as barbaric as it used to be.
If Christ were a UFC fighter, which one would he be?
Hmm, I don't' know. I think he'd be a Forest Griffin type. Vicious but yet forgiving. I always make fun of people's images of Christ. The hippie Christ. The Chirst with the long flowing air, like he came straight from the salon. I make fun of that. I don't think he was that kind of man. I think Jesus was a man's man. Him and his disciples. I tell people they probably had teeth missing.

Now then. The two big questions: Is this actually going to be in the church? And what does two nearly naked men beating each other to a pulp have to do with Christ's resurrection?
Well, it's not actually two guys from UFC coming together to fight. We do a lot of drama and theatrics at our services, so this will be playing into that. We have a guy from the local amateur MMA league who comes to services, so we'll have him gear up and show some techniques. Then I'll show what the fight for faith was about. But no, there won't be an actual event with Kimbo Slice and Chuck Liddell coming in. I wish I could see that.
The Ultimate Fighting is something we're doing to promote to the guys. We want to make Easter relevant again. We don't want to make it about lilies and nice dresses. When they walk in we'll have a chain link fence set up, it'll be set up like an octagon. We'll talk about fact that Jesus didn't tap out, he was an ultimate fighter.
Wow. I guess Easter eggs and chocolate bunnies just don't attract the kids like they used to.
No, they really don't. We're doing Easter Smack Down for our kids. It's not going to be an egg hunt. It'll be a Smack Down. It'll be a cool event. Kids love wrestling. We got inflatable boxing ring and all that stuff. I'm sure we'll get our share of criticism for that.
Why don't you just challenge the other pastors in town to a showdown in the octagon?


Tell 'em I'm waiting. Honestly, I pick on other denominations a lot. Here's what I tell 'em: I come out of a denomination, too. But on any Sunday morning I'll pick on everybody from Catholics to the Amish. We don't hold no bars. We make it so complicated and Christ wanted it to be simple. We like to laugh a lot in our Sunday experience. We do crazy stuff.


What's next? Bare-Knuckle Boxing Christmas? Ass-Kicking Ash Wednesday?
That would be cool!
I guess you really kick ass for the Lord.
Yeah, that's it! That's what we're doing and we love every minute of it.
(Pastor Tom also explained that his church is "non-denominational." "It started a year and a half ago with seven people in my living room," he says. "Now we're past 200 people now and we're launching a second service.")