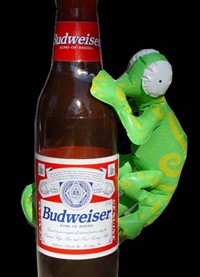 In a statement this week, Budweiser president David Peacock argues that Snow represents a family of beer brands that includes at least 25 individual extensions such as Snow Draft Beer, Snow Super-Premium and Snow Original Malt all of which sell at various price points.

"By itself, Bud Light remains the largest single brand in the world," says Peacock.

In related news...Peacock's words were backed this week by A-B's Louie Lizard, who released a statement of his own, reading simply: "Bud-weis-errrr."