No One Saw This Coming: PETA Urges Zoo to Close Polar Bear Exhibit 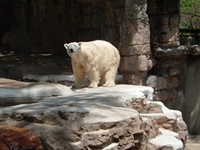 The other day we noted how the Saint Louis Zoo's last polar bear, Hope, died this week from cancer at the age of 23.

Now today...wait for it...that's it...just a second...more...okay, here it comes...PETA announced that it is urging the zoo to permanently close its polar bear exhibit. The animal-rights agency notes that Hope had lived alone at the zoo since Penny and Churchill, the zoo's other two polar bears, died within weeks of each other in 2005.

Following a U.S. Department of Agriculture investigation into the deaths of Penny and Churchill, the zoo paid a $7,500 fine to settle charges that it had violated the federal Animal Welfare Act.

We were sorry to hear about the recent death of Hope, the Saint Louis Zoo's last polar bear. We implore the zoo to take this opportunity to close its antiquated polar bear exhibit permanently. The zoo's attention and funding should instead be directed toward improving conditions for the animals already in its care.

As you surely know, polar bears are highly intelligent, nomadic animals who require enormous amounts of physical activity and psychological stimulation. This complex species is simply not suited to life in captivity and typically develops stress-induced, neurotic behaviors, such as pacing and swaying, as a result of unnatural confinement.

A 2003 study authored by Oxford University researchers and published in the journal Nature found that large, wide-roaming carnivores exhibit high levels of stress in captivity as a direct result of limited space. Captive polar bears were found to be particularly vulnerable because their typical enclosure size measures only one-millionth of their minimum range in the wild, severely restricting natural behavior. The researchers concluded that zoos must either drastically improve enclosures or stop keeping polar bears all together.

Rather than condemning more polar bears to substandard conditions at the Saint Louis Zoo, we hope that the zoo will choose to stop exhibiting polar bears and use the former polar bear enclosure to provide additional space to other animals at the zoo. Such a decision would set an important example for zoos that continue to display polar bears despite overwhelming evidence that these animals suffer greatly in captivity.

Thank you for your attention to this serious matter. I can be reached at 206-898-3653 or JuliaG@peta.org. I look forward to your reply.