Money Makes Us Happy (No, Literally) 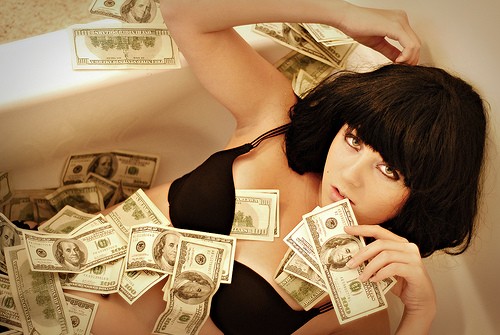 Thinking about money tends to depress me, mostly because the gap between my salary and my outstanding student loans is so distressingly wide.

But now our friends at the New Scientist have published some astounding new research that suggests that if I fondled a dollar bill for a couple of minutes, I might start to feel a little better. Really!

People who feel rejected by others or who were in physical pain were less generous about giving monetary gifts. (There's a moral here: Be nice to Grandma.)

Other scientists in France -- where else? -- have proven that we think about money the same way we think about food. Hungry people are less likely to donate money to charity, while people who were told to imagine they had won a lottery tended to eat more candy.

I would like to suggest to the bosses of this world -- particularly mine -- that all evidence suggests that a monetarily satiated employee is a happier one and may actually work harder.

Now I'm going to rummage around in the bottom of my wallet for a nice, comforting dollar bill.