Gary Sheffield Has the Best Job in the World 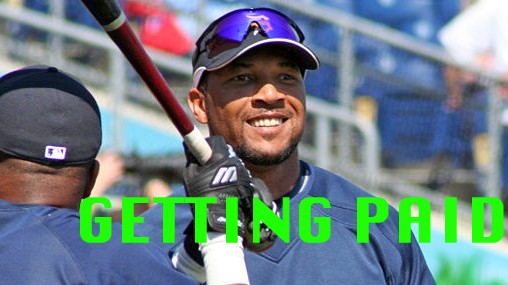 Gary Sheffield is getting paid $14 million to just go away. Do you have any idea what sorts of things I would be willing to do for $14 million? It would certainly make turning tricks at the bus stop again a whole lot easier to stomach, I'll tell you that much.

I have to wonder just what in the hell the Detroit Tigers are thinking on this one. Yes, it is quite obvious to everyone that Sheffield is no longer the player he was in his prime. And yes, he has also proven at times to be a difficult personality to deal with. But this is a guy sitting at 499 career home runs. You don't think that maybe, just maybe, a few extra people might come out to the ball yard to see a possible Hall of Famer in the season he passes the magic 500 homer mark?
In case you haven't noticed, Detroit, you happen to be located at a hub of our current financial collapse. Detroit, don't you think that any possible attendance draw is probably something you ought to jump on, full force?
Oh, and plus, you still owe him 14 million fucking dollars!

It doesn't matter if he just goes home and sits on his ass, you still owe him that money. Now, I doubt that will happen; I'm sure there are plenty of teams willing to pay Gary Sheffield league minimum this season to come and hit a few home runs as a DH. He does still have a fair amount of pop in his bat; he has hit five homers in spring training. I understand the concept of sunk cost and all that, but really?
On the other hand, it certainly makes that $4 million the Cardinals are paying Adam Kennedy not to play for them a whole lot easier to stomach, doesn't it?