A moment of silence, please, for Splash the otter, who died three months ago at age ten after an infection from an abscessed tooth spread to his heart. And another moment for his brother and littermate Slide, who still mourns.

"He's just now getting where I can pet him again," Slide's trainer Glenn Chambers told the Columbia Tribune. "They don't get over it soon."

Splash died in St. Louis, from whence he and Slide had traveled from their home in Columbia for a veterinary appointment. Slide had a sore tooth, too, but was even more traumatized by the loss of his brother. Chambers says Slide didn't eat for a week.

Chambers took Splash and Slide from the wild ten years ago when they were four days old. They "imprinted" on Chambers and his wife, Jeannie, who taught the two pups how to swim in the bathtub. Later they had small roles in several documentaries Chambers filmed for the Missouri Department of Conservation, where he worked, and National Geographic Explorer.

Splash and Slide achieved true fame, however, for their starring role in Chambers' presentation on the value of conservation. Over the course of seven years, they traveled 800,000 miles and met one million schoolchildren before they retired in 2005.

Chambers has imprinted with foxes, coyotes, giant Canada geese and (unsuccessfully) a badger in the course of his career as a documentarian. One of his films, Back to the Wild, which concerned Missouri's attempts to restore white-tailed deer, wild turkeys, Canada geese, paddlefish, sturgeon and river otters to the wildnerness, won four Emmy awards. 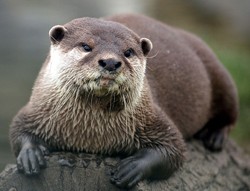 In his presentations, Chambers always emphasized that the otters were not pets. He had the bite marks on his arm to prove it. Still, Chambers slept with Splash and Slide for their first three months and had this to say about Splash's demise:

"It's devastating to me. It's like losing the best pet or dog you ever had. It's really like losing a family member."

Just think how Slide must feel.