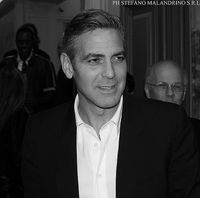 I'm probably the last journalist in town to have spotted you. But I'll be the first to come right out and say it: You. Are. Smokin'. Hot.

Now that that's out of the way.... How cool that you took Ian's cue and made it to Niche on Saturday night!

Great to see you grab a seat at the bar with Kirk Bedell, so nice and nonchalant. I hear Bedell is a pal of Gerard's London-livin' brother. Now pray tell, who were the sort of-blonde babes?


Gerard and co. were apparently expecting you, because they'd saved you a semi-private four-top at the far end of the dining room. Gotta say, it seemed at first like the night would go pretty swimmingly - no camera flashes, nobody grabbing your elbow. This town doesn't come any classier than Niche.

But from my table at the opposite end of the dining room, right in front of the window, a new picture began to emerge.

The valet outside apparently thought it would be cool to let a pair of rode-hard-and-put-away-wet bimbos over at Truman's know that you were in the midst. Before anybody knew it the girls managed to gallop into the restaurant and all the way back towards the loo, and you, while Hostess Ann was taking care of someone else.

Once she figured it out, the little hoosiers were booted in an instant. Wagged right to the door by the lady Ann in red. A fine performance, didn't you think? (Note to valet: You should be fired, kid.)

You got right back to your meal and all was quiet for a time. We hear you forewent the menu and asked the chef to do the honors. Nice! Out came seared scallops with blood orange, escolar crudo with parsnip and persimmon, gnudi with three cheeses and lemon zest...so many wonderful little delicacies that we foodies here hope will make Gerard the James Beard Award-winning Best Chef - Midwest.

Then the eagle eyes at my table started noticing an auburn-haired 30-something at the bar plotting her approach. We watched as she plunked herself down on her knees at your side, bobbing her head and yapping like a small animal.

Man, were you gracious, smiling so.

We hear she burst into tears, played her veterans' card (Air Force? Really?) to thank you for all you've done for our country, and practically spit on Hostess Ann when she tried to clear the area.

I had a veteran at my table and he was disgusted. A woman at my four-top chimed in, Are we Midwesterners really this gauche? Can't the man eat?

Finally, hostess Ann, thoroughly feeling guilty (but not really) for hating on a veteran, beseeched the woman's friend to get her out of your hair. Then the bartender cut them off.

The best had to be shortly before closing, though, when one of the Truman's bimbos returned, with two new cohorts, and took seats at the bar. Chef Gerard, oh so humble and low-key himself, strode right over to graciously escort them right back out. You were having so much fun you didn't even notice.

So, George, I hope you won't take this note the wrong way.

I swear I wasn't tailing you like some others (ahem) in this town. Just that old adage: Right place, right time.