March 24, 2009 at 11:41 AM
comment
At last, the suspense is over. Our long national (or at least local), nightmare is over. We finally know who the player to be named later in the Khalil Greene trade is.
The Cardinals and Padres completed the deal that brought Greene here yesterday, with Luke Gregerson, a right-handed relief pitcher, going to San Diego. So now that the facts are in, how did the Cardinals do?
Well, I have to say, they did pretty damn well, as far as I'm concerned. Gregerson is a very nice player, one that I actually had some fairly high hopes for. Nice sinker, in the 89-91 mph range, and a slider that was once described as "unreal" by Adam Ottavino, another Cards pitching prospect who knows a little something about sliders himself. Gregerson was likely going to start the season in Memphis, putting him only a step away from the majors.

Still, at the end of the day, Gregerson was a very nice pitcher, but came from what is, for the Cardinals, the ultimate position of depth: right-handed relief pitching. Lost in the recent hoopla over Chris Perez going down with a sore shoulder, and what effect that may have on the Cards' bullpen in the extreme short term is the fact that the Cardinal organization as a whole has more dexterous relievers than they know what to do with.
Gregerson, unreal slider and all, was probably somewhere in the neighborhood of thirteenth or fourteenth on the depth chart of relievers that the Cardinals could have potentially called upon if needed.

Just as an exercise for myself, to see how many of said relievers I could name without being forced to call upon outside sources, I tried to come up with my own depth chart, just to see where Gregerson would have placed. Please note that this is based on pretty much nothing other than me pulling names out of my ass, but hey, that's what you guys come here for, right? This is what I came up with:
Chris Perez
Jason Motte
Ryan Franklin
Josh Kinney
Those are all of the relievers in the mix for the closing spot, so I figured they should probably be at the top of said chart. What's that? Am I revealing my own prejudice for the competition with the order in which I listed them, you ask? You bet your ass I am. Moving on...
Kyle McClellan
Brad Thompson
These two are major league pitchers, but probably not in consideration for the closing position. In fact, there's a chance (though not a great one), that one of these two could end up in Memphis to begin the season. Personally, I think it might be a good idea for K-Mac to start down there in the rotation. If he can possibly be a starter, then he needs to be. Starters are just too valuable to make them into relievers without a very, very good reason.
Fernando Salas
Francisco Samuel
Both invited to camp; both had their moments. While neither Salas nor Samuel looks quite ready for prime time, I don't think that the Cards would hesitate -- or at least not long -- to call one of these guys up if the need arose. Salas is probably first up, since he'll likely be holding down a late-inning role with Memphis, while Samuel should probably start in Double A Springfield. I could be wrong on Samuel; Gregerson obviously would have started at a higher level, and may have been ahead of him, but I don't think so. Samuel made quite an impression on the coaching staff this spring; I have to think that would count for something.
Blake Hawksworth
Mitchell Boggs
P.J. Walters
I'm fully aware that all three of these pitchers are, in fact, starters at the moment. Still, they all got relief innings in spring training, and we've seen in the past that Tony La Russa likes to get young pitchers -- even those destined for the rotation eventually -- some innings in the bullpen early on in their careers. If the Cards found themselves in a bind and needed someone to throw some innings, I could see any of these three up in long relief. I almost added Jess Todd to this list, but I'm not sure on that front just yet.
Side note: if I were to nominate one pitcher to come north with the team and pitch long relief innings, it would be Blake Hawksworth. He's looked very, very good this spring, flashing some serious life out of that arm and that nasty changeup that he's always had. Plus, I just have some sort of ridiculous affection for the kid; I have no idea why. Maybe I like the simple, elegant delivery. Maybe I'm a sucker for a guy with a cool name. Maybe I just have a little bit of a crush on his sister. (If you're betting at home, you may want to take a long look at choice 3. Just saying, is all.) Regardless, I would love to see him in the big leagues this year, filling that Adam Wainwright '06/ K-Mac '08 role. Sadly, there's absolutely no way it's going to happen.
Matt Scherer
Luke Gregerson
Ah, there he is. I put Gregerson under Scherer, even though I think he's a better pitcher, because the org chose to add Scherer to the 40-man roster and invite him to spring training. They must see something in the guy that they like. Oh, and if Luis Perdomo (aka the Remains of Anthony Reyes), comes back to the Cardinals from the Rockies, I think he probably slides in right above Gregerson. (Perdomo was taken in the Rule V draft; he must remain on the 25-man roster all season or the Rocks have to offer him back to the Cardinals.)
So by my count that put Gregerson somewhere right around...thirteenth. Huh. My initial guess worked out pretty well. Of course, considering that I was just going by my own memory in both cases, it's entirely possible I'm just equally wrong both times.
The bottom line is this: the Cardinals went out and gambled a little bit on Khalil Greene. He's making a fair amount of coin this season (in the $6 million range, I believe), and was flat-out awful last year. It's certainly a risk, going and getting a guy like that and betting that he can get his shit turned back around. The nice thing is, though, is that the Cards were pretty much playing with house money. Thanks to the outstanding job they've done building depth in right-handed relief, they had more than enough players to make that bet. Even if Khalil bombs out something fierce, what the Cardinals gave up isn't going to hamstring them. 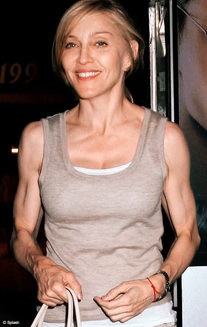 Plus, they got Mark Worrell out of the building while he was still just a malcontent with an inordinately high opinion of himself, rather than a malcontent with an inordinately high opinion of himself and a bum elbow, so you have to count that as a victory.
So on the Khalil Greene trade, I give Mr. Mo my highest-ever grade: a double gold star! (For reference, the scale goes double gold star, gold star, A, B, G, Q, numbers 1-5 in random order, the poison face symbol, silver star, a kick in the balls and, finally, that picture of Madonna I can't seem to stop using.)
So congrats, Mo. You done real good.