One Down For the Tigers, Five More to Go

March 20, 2009 at 9:39 PM
comment
The Tigers move on, Cornell goes home. And in the end, it looked just like pretty much every other Missouri victory.
Watching the Tigers all year, there's a remarkably predictable pattern to every game that the Tigers win. At halftime, the game seems almost evenly matched, the score seemingly always within about 5-7 points either way. Then, in the second half, the Tigers keep running, keep putting up baskets, and their opponents just lose their legs. Their shots start falling short, and Mizzou ends up winning the game by double digits.
At halftime, Mizzou was up by four points on Cornell, a team that clearly should have been overmatched, and I'll bet that there were plenty of Mizzou fans feeling a wee bit nervous at such a narrow lead. We've seen this story before, after all; a Tiger team with plenty of talent that somehow still falls a little short when the chips are down. 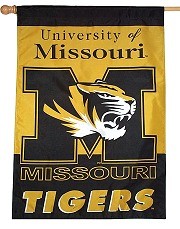 And then came the second half. Cornell actually managed to shoot better in the second half than they did in the first (to be fair, both teams were extremely cold in the first half, shooting-wise), but the Tigers just kept running, kept pressing, kept scoring. Cornell eventually just couldn't keep up.
In the first half, the Tigers outscored Cornell by four points, 29-25. In the second half, Cornell scored 34. That should have been enough to stay right in it. Unfortunately, Mizzou scored 49, and the game ended up the same as all of Mizzou's other wins.
Missouri 78, Cornell 59.
DeMarre Carroll scored 13 points, 11 of them in the second half. Carroll may be the face of this Tiger team; he's just an adequately skilled offensive player, but one of the toughest defenders in all of college basketball, and a truly tireless player, willing to run the floor all night long to get the W. He wears you down, beating you with energy and tenacity and ferocity, all the hallmarks of Mike Anderson's Tiger team. Carroll may never be the best player on the floor when the Tigers play; he's just the player most likely to beat you.
And it's going to be the same way every time.