Driving with The King: Kevin Slaten Back in Radio Prime Time 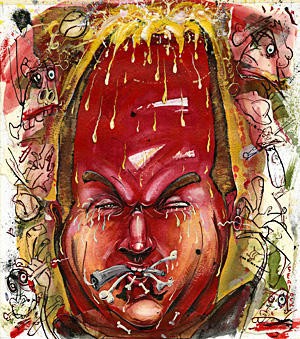 The self-proclaimed "King" of sports-radio will soon be back in the coveted afternoon drive slot. Kevin Slaten will make the move next month when he transitions to the 2 p.m to 6 p.m. hours on KSLG 1380 AM.

The bombastic Slaten -- who blew his top last year after we featured him in an RFT profile -- currently broadcasts from 10 a.m. to 2 p.m. on KSLG. He'll be taking over the drive slot in April when Post-Dispatch columnist and ubiquitous broadcast pundit Bernie Miklasz leaves for a new job at sports station WXOS (101.1 FM).

Slaten, as you may recall, was fired from the afternoon drive slot at KFNS 590 AM last year after he aired a telephone conversation with Cardinals' pitching coach Dave Duncan without Duncan's knowledge or consent -- a violation of Federal Communications Commission rules.

Putting on my "Dan Caesar cap" for a moment, Slaten's new gig is important for two reasons: It would seem to legitimize the appeal of the controversial radio host, and it provides the nation's only local-sports-media beat writer (How the hell is there such a thing?!) with a stockpile of future articles and analyses.

Note: I should mention, too, that radio host Tim McKernan broke the news of the Slaten/Miklasz transition yesterday on his Web site insidestl.com, which is really a pretty incredible piece of reporting considering that McKernan works with both Slaten and Miklasz at KSLG 1380.

In unrelated media news, my colleague Paul Friswold just got up from his desk to take a leak. You heard it here first at Daily RFT!