Baseball Card of the Week: The Carpenter Chronicles

March 20, 2009 at 2:59 PM
comment
Hello, and happy Friday to one and all.
It's time once again for our weekly tradition here at the Rundown, and I've got something really nice for you today.

A couple of months ago, a friend of mine by the name of Mike Thompson sent me several scans of some of his baseball cards. They were all really great cards, but with one small problem: I had already used almost all of the players that he sent me at one point or another. There was, however, one card of a player that I hadn't done yet, and I sort of filed it away for a day when it would really be appropriate. 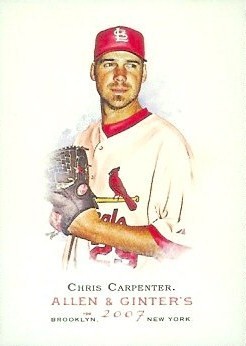 What we have here is a 2007 Chris Carpenter card by Topps, from their Allen & Ginter historical recreation series. It's a series of cards featuring current players, made to mimic the tobacco cards of the early days of card collecting, and I think they're probably some of the most beautiful cards on the market today.
I wrote yesterday about how great it was watching Carpenter back on the mound, doing what he does so very well again; all the while hoping that I wasn't jinxing him. I was prepared to commit some sort of ritual suicide if I awoke today to find a news report featuring the words Carpenter, Paletta, and precautionary in any arrangement. (Actually, come to think of it, "Carpenter Told to Stay Away From Paletta as Precautionary Measure" might be all right, I suppose.)
Thankfully, that hasn't happened so far, and I wanted to celebrate my continued life with a little something for the T-1000 of the Cards' pitching staff. I don't really have anything else to offer; I'm just glad not to have to have to stab myself to death or anything like that.
So on that note, I'll wish all of you a happy weekend, and to the man whose bionic arm held together, thus saving my life, I wish godspeed.
As always, if you have any submissions you would like to see featured in the Card of the Week, please send them to me at asaeschafer@gmail.com.