The Blues: So Close, Yet So Far Away 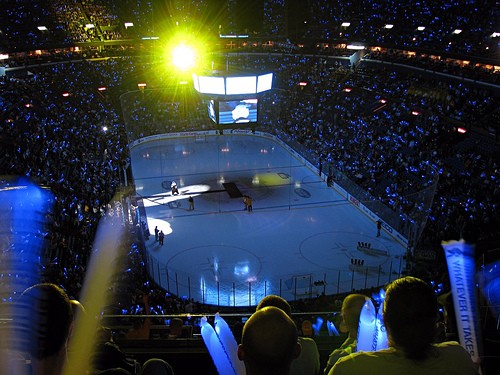 Chris Mason just kept making save after save, and the Blues went down time after time and took good, solid shots. I kept thinking that eventually, something just had to go in.
Turns out I was wrong.
Well, technically, something did eventually go in. Unfortunately, it was a shoot-out goal, and it wasn't shot by a man in a St. Louis jersey.
So instead of moving past the Edmonton Oilers and into a tie for that last playoff spot, the Blues instead find themselves two points back, and the clock still ticking. There are only twelve games left to go in the season; as well as the Blues have played these past couple months, time is very quickly running out.
I have to admit, I've almost started to get that feeling about this team that I've had about certain other teams in the past, that "team of destiny" feeling. It just feels like this team is going to make the playoffs, logic, numbers, probabilities and a ridiculously tough conference be damned. Now, though, I'm starting to get a little worried. Not because the Blues aren't playing outstanding hockey, mind you, because they are. (Games against Detroit just flat out don't count.) It just doesn't seem like any of the teams above them are losing either.
Since Edmonton is the team that the Blues are essentially chasing, let's take a look at their upcoming schedule: On Thursday night, they play at the Colorado Avalanche. The Avalanche happen to be one of the few teams below the Blues in the standings, so that's a good match-up from the Blues' perspective. If the Avs can beat the Oilers, there's only good for the Blues.
After Colorado, the Oilers move on to Chicago, and then to Minnesota. Both teams are above the Blues; the Blackhawks are far enough up that it doesn't hurt the Blues if they win. Unfortunately, the same can't be said for the Wild, who are just ahead of the Blues in the standings. Even if the Wild beat the Oilers, a team right ahead of the Blues (or right behind; the Blues do play the Wild next, and will have a chance to jump over them with a win), will still gain the points.
Closing out March, the Oilers play Anaheim twice, Detroit, Minnesota again, and the Phoenix Coyotes. Detroit and Phoenix don't factor in to the Blues' playoff hopes; the Red Wings are way, way above, and Phoenix is too far back to be a real threat. Anaheim and Minnesota, though, are both within three points of the Blues at this moment. Both are legitimate concerns.
This, then, is the nature of the Blues' dilemma. Anaheim, Nashville, Edmonton, Minnesota, Dallas, and St. Louis are all grouped within three points of each other. Of those six teams, there are only two spots available for the playoffs. What's even worse, those teams all seem to play each other an inordinate amount of times over the remainder of the season. Take those four games, just between now and the end of the month, that Edmonton plays against either Anaheim or Minnesota. In every single one of those games, the outcome is likely going to be damaging to the Blues. In each one, of course, you can try and root for whichever team is trailing the Blues currently, but even so, that's two points that someone is going to pick up, gaining ground on the Note.
I suppose that's the way that playoff races are in general, of course, but this one seems to set up rather poorly for our icebound heroes. Technically, yes, I suppose it does set up poorly for most of the other teams too, for the same reasons, but I don't care about those teams.
As it stands, all the teams grouped around the Blues are going to be picking up points in most of their games, at least through the end of the month. The Blues are riding a goalie in Chris Mason who has done a tremendous job, but is also really carrying a team for the first time in his career. He's hot now, and has stayed hot for quite a while, but I wonder how much longer he can keep it up. The workload has got to be wearing on him.
This season has been a great ride for the Blues and their fans; I honestly don't recall ever being as enthralled by a playoff race (in hockey, at least), as I have been this one. But looking at the way the schedule sets up, and considering that the Blues are riding a goalie who hasn't had a day off in I don't know how long, I'm worried that they're going to come up just a little bit short.
And that sucks. 'Cause if there's one thing that I love seeing, it's a team that manages to beat a curse. Oh, and a Republican curse, at that.