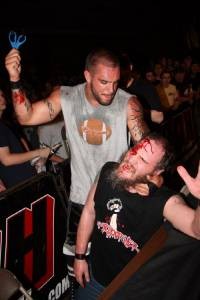 Ring of Honor Wrestling brings its rough and raw brand of wrestling to the Gateway Center in Collinsville, Illinois tonight. You can argue whether the fights are real or faked to your heart's content -- it don't make no nevermind to me. Wrestling is about escapist entertainment, nothing more.

Oh, and it's also about the poetry of violence.

There have been thousands of wrestlers over the years. The ones you remember are the wrestlers who bring some flair, something memorable to the ring. Most of the time, this savoir faire occurs in the area of nomenclature. Why call that inverted neckbreaker an inverted neckbreaker when you can name it the Diamond Cutter?

That happy fellow with the bleeding forehead in the picture is ROH wrestler Necro Butcher. One of his signature moves, according to his Wikipedia page, is the West Virginia Violence Parade. Beautiful, evocative language for a brawler's move. Throw multiple punches at a guy trapped against the turnbuckle, and when he drops to his butt, stomp him some more -- it sounds so much more impressive as the West Virginia Violence Parade. Necro Butcher is also known for the Pumphandle Slam, the Skull Vice and the Necro-Canrana. Clearly, he has a way with words -- and you should expect no less from a man who was crowned King of the Deathmatch.

Pooh-pooh wrestling if you like, but respect the language. In fact, to better appreciate the eloquence of wrestling, why not take a little quiz.

Which of the following terms are Wrestling moves and which are Urban Dictionary-style Sex Acts?

If you guessed "wrestling move" every time, you win. Hell, America wins every time somebody goes all Shining Wizard in the ring. And if you don't believe it, take it up with Necro Butcher.