St. Louis Smokers and Non-Smokers to Face off March 17 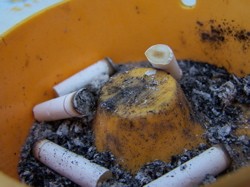 Attention all flip-floppers, wafflers and vacillators who still can't make up their minds about whether St. Louis needs a smoking ban (probably the same folks who were "undecided" days before the election), there is a "Smoking Showdown" scheduled on March 17.


The event, which will be held at the Regional Arts Commission in the Delmar Loop, will feature a back-and-forth debate between Bob Levy of the CATO Institute (anti ban) and Martin Pion of Missouri GASP (pro ban).


Former Federal Reserve economist Michael Pakko (neutral), will discuss the potential financial impact of a smoking law.
And of course, everyone's favorite kooky "smoker's rights" advocate, Bill Hannegan, will be in attendance. He's calling the debate, "A chance to hear the issue more fully ventilated, so to speak."
So why is this event happening on St. Patrick's Day? Maybe it's in honor of Ireland's resoundingly successful smoking ban, which has been in place since 2004.
Show starts at 7 p.m., dinner ($15, RSVP required) is served at 6:30. More info here.

Organizers haven't made it clear whether the debate centers on a ban in St. Louis city or St. Louis County, but the mayors of Clayton, Creve Coeur, Olivette, Overland and University City in St. Louis County have thrown their support behind a county-wide ban. In St. Louis city, Mayor Francis Slay has come out against a city-wide ban on smoking. Illinois passed a statewide indoor smoking ban on January 1, 2008, though that law's been broken plenty of times.