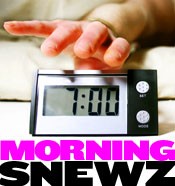 But, hey, the good news? You'll soon have a chance to make up for your lost income. Pinnacle says it's on track to open its new casino in Lemay early next year.

And here's some more cheerful news: Police in Columbia, Illinois, are trying to figure out why the state's Department of Children and Family services allowed a woman to keep her baby after she attempted to drown the infant in a toilet in November. Last week investigators found the remains of another baby rotting in the woman's basement.

In sports, the Missouri Valley Conference bball tourney is underway at Scottrade Center. Tip off for the first game of the day (N. Iowa vs. Indiana State) is at noon today.