Could God-Fearing Kurt Warner Be Headed to the Land of Loose Morals?

March 03, 2009 at 11:16 AM
comment
Could All-American, god-fearing Kurt Warner be headed to San Francisco, the land of free love, legal pot and loose morals?!?

Warner and his wife Brenda are revered here in St. Louis for their outreach efforts with the impoverished through Habitat for Humanity and other causes. But something tells me he won't be heading into Castro if he becomes a 49er. 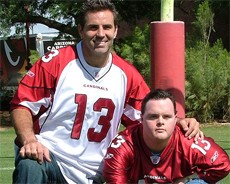 Let's hope Warner heads north. Now that the former Ram and now former Cardinal has become a free agent, he can hang around a few more years, building his Hall of Fame resume. According to the San Francisco Chronicle, Kurt visited SF Monday, where the owners of the San Francisco 49ers have offered him $20 million for two years.

If he goes to the Bay, Warner has a moralistic predecessor to look to for guidance. The great Steve Young, who inspired many touchdown-pass impersonations for kids in the '90s, was the starting QB for nine years in San Francisco. He is also a devout Mormon, great-great-great grandson of Brigham Young, and the second president of the Mormon church.

That made it all the more surprising when Young -- perhaps his years in SF rubbed off a little -- when he and his wife defied their church and came out in favor of gay marriage during the Proposition 8 vote last November. Touchdown!