That Was Fast: Denny's Story Disappears from Stltoday's "Most Popular" Feature

February 25, 2009 at 3:03 PM
comment
Yesterday I wrote how a story on stltoday.com had become something of an Internet sensation due mostly to the picture accompanying the article. 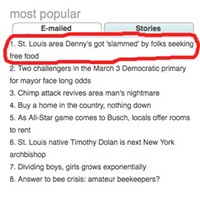 The story was about a free breakfast promotion at Denny's and featured a photo of an African-American family getting their fill of gratis grub at the restaurant. The story remained one of the "most popular" articles on the Web site for three weeks thanks to 100-plus people who commented (mostly derisively) about the family in the photo.

On Monday of this week I left Post-Dispatch editor Arnie Robbins a voice mail about the picture and the story. Robbins never called me back, but by Tuesday the photo in question no longer accompanied the article.

Now today (Wednesday) the Denny's story has suddenly dropped altogether from the list of "most popular" stories. Hmm. Most curious I say.