Jose Canseco Sleeps With the Fishes

February 24, 2009 at 3:02 PM
comment
You know, I had never really thought about the steroid issue from this angle before, but Ron Kittle thinks that Jose Canseco may want to watch his back.

After the former Oakland slugger broke baseball's code of silence, Kittle (who once won the AL Rookie of the Year Award with the Chicago White Sox), thinks it's only a matter of time before someone takes a shot at Canseco.

"My first thought was: 'I wonder who's going to be the first one to shoot him.' I still think somebody who might have had their life ruined might take vengeance on him. If I were [Canseco], I would think about that..."

What is the world coming to, when a steroid freak ex-ballplayer can't squeal on all his former teammates without his personal safety being threatened? 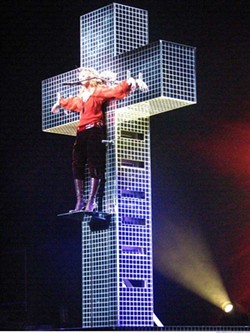 You know who I blame this all on? Madonna. That's right, Madonna. The woman just seems to spread misery everywhere she goes these days. It happened to A-Rod. It happened to Guy Ritchie, who hasn't made a good movie since Snatch, after which he seemed to just get lost in Madge's, well, I think you see where I'm going with this, right?
And now Canseco. He spoke, at great length, in his book about Madonna being all over him; in fact, he made that one of the selling points of Juiced right in the introduction. He invited in disaster, and now it comes a-calling.
Expect him to be dead in a week. And when it happens, we'll all know who to blame, won't we?