How About Those Billikens?

February 23, 2009 at 3:04 PM
comment
Mardi Gras kept me from joining the sold-out crowd on Saturday at Chaifetz Arena, so when I saw that Saint Louis University's men's basketball team somehow managed to beat Dayton 57-49, my eyes nearly popped out of my mildly hungover head.
Just from speaking to others who attended and reading the Associated Press and Post-Dispatch accounts of the game, it sounds like the Billikens finally put it all together in one game for the first time all year. As one colleague noted, "It finally looks like there's a Division I basketball program in St. Louis."
A few stats/items that stand out:
- Nine points for Barry Eberhardt, including a clutch three (Seriously, Eberhardt?!) late in the game, and a perfect 4-4 from the field.
- Another all around performance from Tommie Liddell, who finished with ten points, three rebounds and five assists.
- Nineteen points, including nine from the charity stripe, for Kevin Lisch.
- Stellar defense as usual for SLU, holding Dayton to 30 percent shooting from the field.
- Seven blocks for Willie Reed, one off the school record. 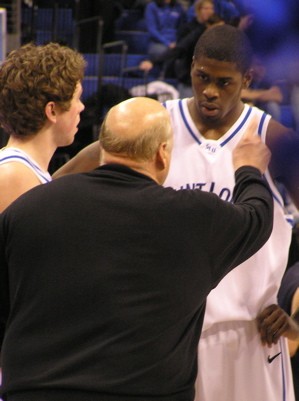 The Bills have significantly improved as the season has gone on and are already miles ahead of where they were last year. It appears Majerus is going to do with Saint Louis what he did at all of his other head coaching stops: mediocre the first year, dramatically improved the next.

This isn't quite Ball State (where he went 29-3 in his second season) or Utah (where he went 30-4 in year two), but the Bills have three regular season games left and all of them are winnable. That puts them at 20 wins, and for a team as young as the Bills, that is a huge, huge success.
Now they just need to do something about that student section, which, as Bernie Miklasz astutely pointed out in his column yesterday, has been inconsistent all year. Seriously kids, rushing the floor against Dayton? Save it for Xavier.