February 23, 2009 at 1:45 PM
comment
I gotta tell you, I think that the NFL draft may be my favorite thing about the NFL. Seems a little weird, I know; one would think that I might prefer, oh, you know, actual games and things like that, but nope. I love the draft in just about every sport, but the NFL draft is the granddaddy of them all. It's like Christmas.
Right now, the NFL combine is going on, and players are being judged on pretty much everything but how well they actually play football. They're being measured, and timed, and taking some sort of IQ test, and running around in shorts. What that tells any of us about what kind of football player they are is up for debate, but it's still an awfully exciting time, one of the really big signposts on the way to the draft.
With all of that in mind, I wanted to start taking a look at what we may see the Rams do on draft day. They'll have the second overall pick for the second year in a row, and there are plenty of holes that need to be addressed.
The general consensus is that the Rams' biggest need is at the offensive line position, and I would tend to agree. Orlando Pace is coming pretty quickly to the twilight of his career, and the man that was ostensibly drafted to be his successor, Alex Barron, has proven to be a frustrating, underachieving enigma. If there's a single position that needs to be addressed in order to start building this thing back toward prominence, the offensive line, and the offensive tackle position in particular, is probably the place to start.
The Rams wanted Jake Long, the offensive tackle prize of the 2008 draft, but the MIami Dolphins took him first overall, leaving the Rams to move on to shore up their defensive line with Chris Long. This year, there should be no shortage of offensive linemen available at No. 2; the question will be which player is going to be the guy.

For most of the past season, Andre Smith was the near-consensus top offensive lineman in the draft. He was the biggest, most physically dominating player on the board, and he seemed to be a lock to be one of the first two or three names called on draft day.
Things haven't gone quite as planned, though, since the end of the college football season for Smith. He was suspended for Alabama's bowl game, due to his talking to an agent prior to the game (not an NCAA rules infraction, but apparently a Nick Saban infraction), and has done little to make himself look any more appealing since. He isn't taking part in workouts at the combine, due to the fact that he just isn't in shape for it. (He did get measured and weighed at the combine, tipping the scales at 332 lbs.) 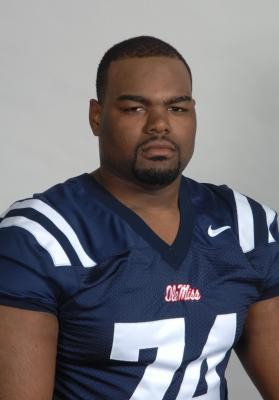 If Andre Smith was the beast of the SEC this past year, then Oher was the unsung hero for an Ole Miss team that finally started to show some real signs of life after several rough years.
Oher had a solid outing at the senior bowl, proving his competitiveness and physicality to anyone watching. The only real concerns with Oher are in the mental department, where his overall mental agility and his decision-making in particular have been called into question. Occasional lapses in consistency and poor decisions notwithstanding, Oher should make a solid left tackle in the NFL.

Until the sudden rise of Jason Smith, Monroe was the offensive lineman with the most impressive athletic gifts in this draft. Monroe moves more effectively than either A. Smith or Oher, and is better able to buy his quarterback time even if the pocket begins to move. He's also an impressive run blocker, creating big holes with his ability to pull laterally to either side.

A former tight end, Jason Smith has seen his draft stock absolutely skyrocket in the past year, going from being the fifth or sixth tackle on most boards to some actually having him ranked as the Number 1 offensive lineman in this year's draft. Every year, there seems to be that one player with big helium, and Smith is that guy for 2009. A physical specimen, he benched 225 lbs. an unbelievable 33 times at the combine. Whether or not that athletic prowess translates into big time on-field performance remains to be seen, but Smith was a force for Baylor on its line all year and is looking more like a beast all the time.
The Good: Possessing remarkable athletic ability for his size, J. Smith moves even better than Monroe, having played several other positions on the field in the past. As evidenced by his performance at the combine, his strength is also outstanding, enabling him to overpower most defenders at the point of attack. Pulls well in the running game as well, with quick feet and excellent lateral movement.
The Bad: Smith is the smallest player in this group, and while his strength is unquestionable, there are some concerns that he may be susceptible to players who can gain a leverage advantage on him. As with virtually any fast-riser, there is danger that he is being overrated due to what basically amounts to a hot streak. There have been questions in the past as to his competitiveness, though those have become less with time. Like Michael Oher, appears to take plays off at times.
The Verdict: Any time a player comes out of the football season and into the combine with a ton of helium, there are always questions about how trustworthy the current results are. If Smith is really this guy, the argument goes, why did most everyone see him as a second- or even third-round pick until just fairly recently? You have to worry he's just another workout wonder; a guy who wows you with his weight-lifting and sprint-running acumen, only to look over-matched or, worse, just lost out on the football field.
Personally, I like Jason Smith. I think the athletic ability he brings to the table is just too great to ignore. Of the four players here, I probably give Monroe the edge over Smith, simply due to the greater weight of performance, but there's no denying the potential that Smith has. With his height, strength, and remarkably nimble feet, he could very well end up being the best of this bunch. On the other hand, I think he also has a bigger downside; he could be the guy everyone saw the first couple years of his college career, rather than the rising young superstar he looks to be now.
Regardless of the direction the Rams ultimately go, this is certainly an excellent year to be looking at an offensive lineman. There's both depth and impact at the top, and the Rams should have their choice of which player they want. Personally, I think the Detroit Lions go ahead and take Matthew Stafford, the Georgia quarterback, at Number 1, leaving all of these players on the board at Number 2. Any one of these guys could well prove to be a future cornerstone, if Billy DeVaney and his staff know their stuff.