The Chesterfield Mall is Watching You 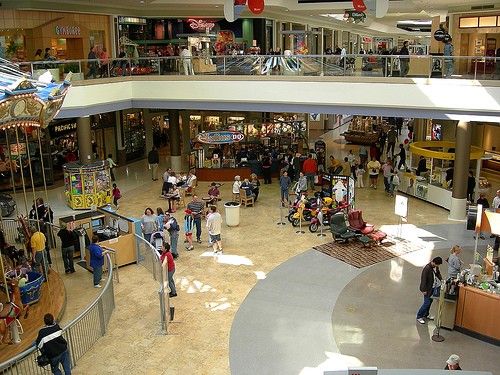 It is a fact of life that people go to the mall to look at things. Especially thirteen-year-old people who have no other place to go. But now, at least at Chesterfield Mall, the things are looking back.

AdSpace, the New York company that owns the ad screens liberally scattered throughout the mall, has decided to use Chesterfield as a testing ground for its new TruMedia screens, which use sensors to track the number of people who look at them.

"You know how you can feel when someone is looking at you?" asks AdSpace executive vice-president Bill Ketcham. "Humans are wired to pick that up. The sensors are based on biometrics. They can identify a person's facial structure. They can pick up on whether an eye is looking at the screen, down to a few hundreths of a second. It's cool. It replicates the brain."

The sensor technology, Ketcham says, comes from the security industry. It was developed in Israel in order to track terrorists.

But all AdSpace wants to do, in the considerably more peaceful American shopping mall, is determine how long people are looking at the ads and pass that wisdom on to its customers.

"Clients tend to want to use 30-second TV ads," Ketcham explains. "But we've found that the median view time is only eight to ten seconds."

Ketcham admits that the sensors are capable of figuring out the sex and rough age of whoever is looking at the ad, but AdSpace has no plans yet to tailor the ads on the screen to the specfic viewer. "It's a mass medium," says Ketcham. "Millions of people come through the mall every month. It would be hard to tailor the creative to the specific person looking at the screen."

AdSpace has 1,389 screens in 109 malls nationwide, including four in the St. Louis area. (Besides Chesterfield, they are MidRivers Mall, West County Center and St. Clair Square.) Chesterfield was chosen as a testing spot, Ketcham says, because it's an average-sized mall (1.3 million square feet) with an average number of screens (eighteen).

The other testing spots are in Pittsburgh and Winston-Salem, North Carolina.

In the month that the TruMedia systems have been in place, AdSpace haas been able to report some happy news: there have been more people roaming the malls lately than there were at this time last year. Whether they are spending money is difficult to say.

There are currently two TruMedia systems in the Chesterfield Mall, but Ketcham can't say where. "The whole idea is not to make it too obvious," he says. "We don't want people to feel uncomfortable."