The Blues Come Up Short When it Counts... Again 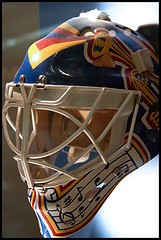 Going into last night's game against the Columbus Blue Jackets, plenty of talk was being devoted to the fact that the Blues had only lost one game in regulation in the previous eight contests. Unfortunately, that particular loss was a bad one, coming at the hands of Vancouver, one of those playoff bubble teams that the blues are directly chasing.
So last night, the Blues again had the chance to make up some ground on a probable playoff team. And how did they do? Well, as they say, it was deja vu all over again.

Since the 15th of January, the Blues have played in fifteen games, and gained at least one point in twelve of those contests. They've won eight games, lost three, and lost four others in overtime. Not too bad, right? Unfortunately, of those three losses, two were of the four-point variety, in which a team the Blues are directly chasing gained two points, while the Blues came away with a big fat zero.
Unlike the loss to the Canucks, when they were in full control for two and a half periods, only to watch is all come tumbling down in a heap at the end, the Blues dug themselves an early hole in this one. Chris Mason looked more like early season Mason than the goal-stopping machine he's been most of the second half. The defense was lackluster yet again, and the score was 4-1 before you knew it.

Of course, a big deficit does give you a chance for a great comeback, and the Blues nearly managed it. T.J. Oshie and Alex Steen both had goals, pulling St. Louis back to within 4-3, but the Blue Jacket's Mason, Steve Mason, stood on his head to stop a potentially game-tying shot with thirteen seconds left off the stick of Brad Boyes, followed by a rebound shot by David Backes. Just like that, it was over.
And that is why the Blues find themselves on the outside looking in at the moment. They're seven points behind the eighth and final playoff spot, which at the moment is represented by the Edmonton Oilers. The Blues are nine points back of Columbus, 64-55. The same margin separates the Blues and the Canucks. Of course, had the Blues managed to eke out even a single point in either of those games, the deficit would only be seven points, and only five for that last playoff spot.
Sadly, it's looking more and more like our boys in blue are going to come up a little short again this season, the victims of awful goaltending early on, and remarkably poor timing for their worst performances. Sad, too, because this team has grown by leaps and bounds this season, turning what looked like yet another brutal, injury-cursed season into a rather exciting prospect. If the Blues had played at this level all year, instead of digging such a huge hole the first two months, they would most likely be one of those teams moving on into the postseason.
Instead, it looks like another offseason of patience and what-ifs for Blues fans.