February 18, 2009 at 1:13 PM
comment
Yesterday was a rough day for baseball. The A-Rod press conference wasn't so good, and the game took yet another hit to its already-crumbling credibility. All in all, just a bad scene.
However, all was not bad in the land of baseball. The lord giveth, and the lord taketh away; yesterday he gave us a little bit of magic to try and offset all the ugliness trying to break our spirits.
Hannah Storm, of the Eastern Sports Programming Network, grabbed perhaps the quote of the year yesterday when she asked Johnny Damon about what he thought about the steroid use of Alex Rodriguez. The response can only be described as brilliant: 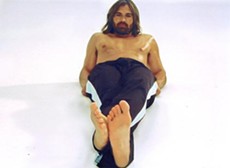 The question was asked, "Johnny, what would have been worse?" Prepare to be awed:

"Murdering someone... There's plenty of things that could be worse than what he did."

That's right, folks. Just remember, next time you're getting down on a player because he used steroids, or HGH, or something else, he could have killed someone. See, now that whole steroid thing doesn't seem so bad, huh?
What I can't quite communicate to you in print is the exact length of the pause Damon took after his revelation that murder is, in fact, worse than cheating at baseball. It was a good ten seconds, filled with stammering attempts at speech, apparently as Damon tried to think of a single other crime worse than steroids. Sadly, he was unable to, leaving us all to assume that steroids follows murder as the second-worst thing a human being can do.
And here I thought A-Rod might have to worry about a suspension. Turns out, he could be on trial in the Hague very soon.

The Rundown Shit That Gets Passed Around