Cardinals Avoid Getting Stuck In the Middle with Arbitration for Ludwick, Ankiel

February 17, 2009 at 10:09 AM
comment
Well, the Cardinals managed to get both of their high-profile cases under contract and they didn't have to go to arbitration on either one.
With the announcement yesterday that the Cards and Ryan Ludwick have come to terms on a one-year deal, thus avoiding arbitration, the Cardinals have managed to dodge that bullet for another year. Probably a good thing, too; arbitration is a really nasty process, and I don't think it's ever really helpful for a team and player to go through it. I know I wouldn't be nearly as enthusiastic about writing a column for all of you nice people if my salary was based upon the RFT arguing that I really just wasn't all that good at my job. Just not much of a morale boost, you know? 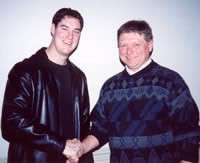 The one thing that I really don't get is why it took this long to get these deals done. The numbers from both sides were submitted almost a month ago; why in the world did it take until the very last second to come up with a deal? Ankiel and Boras asked for $3.3 million, the Cardinals offered $2.35 mil, and the final settlement was $2.85. I'm not the best in the world at math, but that looks to be pretty much the midpoint to me.
Ludwick and his agent asked for $4.25 million, and the Cardinals countered with an offer of $2.8 million. A lot was made at the time of how large the gap was between the sides; one of the largest in all of baseball, percentage-wise, and all that. The final settlement was $3.7 million. So, let's see, that about $200,000 over halfway between the two? Again, a fucking month to do all this?
What we essentially have here is the baseball equivalent of going out to dinner with your friends, then spending an hour and a half arguing over how to split the bill. After that hour and a half, by which time you're late for the movie you had planned on seeing and your date looks too sleepy and bored to have sex when you get home, you just decide to split it in half anyway. All that time wasted that could have been used better on something else. No movie, no nudity, no nothing.
Don't get me wrong; I think it's great that the Cardinals managed to avoid having to actually go to the hearing with both of these guys. Ludwick in particular I liked when he came up in '07, and I thought he was just dynamite pretty much from the get-go last year. Still, I have to wonder why all parties couldn't have just said, on the 21st of January, "Hey, how 'bout we just split the difference? That okay with you guys?" Seems simple to me.
I guess I just wouldn't make a very good agent. Or a GM, for that matter.