February 12, 2009 at 2:24 PM
comment
UPDATE: KMOV reporter Robert Townsend has also been laid off. His biography page on the KMOV Web site has  been removed.

Got word that Channel 4 (KMOV-TV) let go of its senior reporter John Mills today. Unclear right now if anybody else got shown the door. 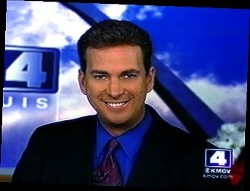 Mills was a breaking-news, general-assignment guy who reported live for weekday evening newscasts and then filled in as anchor when subs were needed.

He worked for KMOV for thirteen years and won several of journalism's highest honors, including a George Peabody Award and an Edward R. Murrow Award. Your very own Riverfront Times named him the "Best Reporter TV/Radio Division" just last fall.

Mills has posted a statement on his Web site thanking the people of St. Louis for all the stories over the years.

He told me, "If any St. Louis companies or organizations are interested in a loyal and dedicated employee, I would very much appreciate their consideration. I really feel that way! I'm not bitter. In TV this was an incredible run."

Mills is the third marquee reporter that Channel 4 has pink-slipped in the last year. The station let go of police reporter Kara Kaswell and investigative reporter Mike O'Connell in 2008.