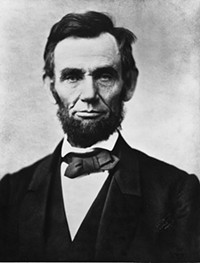 Just in case you're not reeling enough from Unreal's exclusive report about Abraham Lincoln's religious heritage, here's some more Lincoln trivia, courtesy of Christopher Buckley at The Daily Beast. Didja know Mary Todd Lincoln was a man?  It explains so much!

Mary Quite Contrary, by Herbert Donald David. David, author of 27 books of Lincolniana, now says that there is "persuasive evidence" that Mary Todd Lincoln was in fact a man. "If you look closely at the photographs," David writes, "it's like, way obvious. The face, the hands, they couldn't possibly have been those of a woman. The intriguing part is how she was able to conceal the fact from her husband all those years." Intriguing, indeed. The presidential children, Tad and Willie, were, in David's telling, actually born to a Danish housekeeper named Hagnar, whom "Mary"--his birth name was allegedly Seymour Pitt--kept in the basement.