The Adam Kennedy Era Comes to an End

February 09, 2009 at 1:35 PM
comment
The Cardinals just released Adam Kennedy.
Huh. Didn't see that one coming. I mean at all. At all.
All we've heard recently is how Kennedy is the guy at second base. And you know what? He should have been. Yes, he was flat-out awful in 2007. Last year, though, he rebounded with the bat, and his glove was outstanding. In fact, Kennedy was better than the biggest second base name on the free agent market, Orlando Hudson, in 2008.
Now, does that mean that I like Adam Kennedy? No, not particularly. He didn't seem all that dedicated to his conditioning, and the man may have the single ugliest swing in the history of baseball. Also, his acting sucks. Nonetheless, I fail to see what this really accomplishes.
Based on the info in Joe Strauss' column, it seems that Tony La Russa was the one guy pushing for Kennedy to get his walking papers. Interesting then, that once again TLR was unable to make peace with a player with whom he had a conflict. First Scott Rolen, then that nonsense with Jim Edmonds, and now Kennedy. 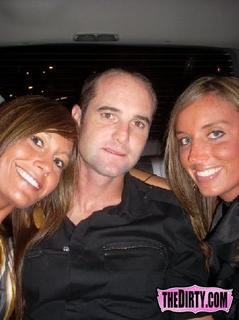 This move will, however, make for a ridiculously interesting spring training. I wonder if Tony is just that damned desperate to somehow find a way to keep Skip Schumaker on this team when Colby Rasmus comes to town?

Technically, if Skip can play any kind of second base at all (and I've made my feelings on this clear in the past), then having no Kennedy around to take the lion's share of the at-bats would certainly do it.
So now the Cardinals are on the hook for about $4 million for 2009, and no second baseman. Either Mozeliak is the most brilliant GM ever, or he just caved in to Tony to try and make the manager feel better about not getting the closer he wanted, or the impact bat he wanted, or the diamond-studded dog carrier he wanted. Personally, I'm really hoping it's the former, and I'm just not seeing the brilliance of the move.
Anyhow, happy trails, Mr. Kennedy. The Adam Kennedy era in St. Louis certainly wasn't what I was hoping for when the Cardinals signed him, but then again, maybe I was just hoping for too much. See, I thought we were getting the Angels' Adam Kennedy, not the broken down, ground ball to second version.
And as for the Cardinals? Well, all I can say is that I hope this all works out. Otherwise, paying four million bucks to an empty roster spot is going to look mighty stupid.