Jerry Seinfeld is coming to the Fox Theatre on Saturday.

The comic will go down in sitcom history for introducing the world to puffy shirts, Festivus, the Soup Nazi, Manziers, the joy of eating cereal for dinner and a whole lot of nothing. But not content to let his legacy rest there, since the conclusion of the titular NBC smash, Jerry Seinfeld has continued to hone his stand-up skills across the country and in the concert film I'm Telling You for the Last Time, not to mention documenting the at-times painful process in the 2002 industry cult favorite Comedian.

And though we couldn't quite swing a chat with the busy comic/writer/filmmaker/Superman fan, we can certainly imagine how one might transpire. 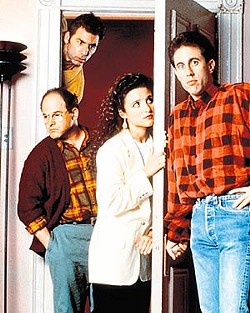 Seinfeld: If you know what happened in the Mets game don't tell me; I taped it. Hello? ("The Seinfeld Chronicles")

[Laughs] Hi, Jerry. Is that how you always answer the phone?

Seinfeld: Vandelay Industries, Kel Varnsen speaking. May we help you? ("The Boyfriend")

[Laughs] So Jerry, as you've just proven, apparently you're always on. Were you funny even as a child?

Seinfeld: Y'know I remember when I was a kid growing up, kids would make fun of my name like you wouldn't believe: "Jerry Jerry Dingleberry," "Sein-smelled." ("The Junior Mint").


And now you have three children of your own. How have they influenced your creative process?

Seinfeld: I'm in the unfortunate position of having to consider other people's feelings. ("The Gymnast")

What profession would you be in today if you hadn't become a comedian?

Seinfeld: The Chalk Outline guy's got a good job. Not too dangerous, the criminals are long gone. I guess these are people who wanted to be sketch artists but they couldn't draw very well. "Uh, listen, Jon, forget the sketches, do you think if we left the dead body right there on the sidewalk you could manage to trace around it?" How does that help them solve the crime? They look at the thing on the ground, "Oh, his arm was like that when he hit the pavement....the killer must have been...Jim." ("The Trip")

As a comic, do you have a preferred place to write? A particular room, favorite chair?

Is it the visual aspect of the produce section that appeals to you? Looking at the world around you in a particular way is, I assume, a big part of being a top observational comedian?

Seinfeld: Well, you're the big look expert. I wanna see how smart you are. ("The Wink")   Am I? I'm pretty sure the only thing I have the vaguest working knowledge of is arts and entertainment.

Seinfeld: Did you know that the original title for War and Peace was War, What Is It Good For? ("The Marine Biologist")

Can't say that I did. Did you know that Seinfeld guest star Bette Midler is in residency at your Las Vegas home base, the Caesars Palace Colosseum?

Seinfeld: "She had man hands!" ("The Bizzaro Jerry")

Would you say that working with her has been a highlight of your career? Or would you point to another accomplishment?

Seinfeld: "It pains me to say this, but I may be getting too mature for details." ("The Deal")

Seinfeld: I once had a leather jacket that got ruined in the rain. Why does moisture ruin leather? Aren't cows outside a lot of the time? When it's raining, do cows go up to the farmhouse, "Let us in! We're all wearing leather! Open the door! We're going to ruin the whole outfit here!" ("The Jacket")

Well, if that's the great tragedy of your life I'd say you're doing pretty good.

Seinfeld: Master of my domain. ("The Contest")

Anything you're looking forward to doing in St. Louis during your downtime?

Seinfeld: It's one day. Half a day, really. I mean you subtract showers and meals, it's like 20 minutes. ("The Pen")

I guess. Especially if your flight happens to be delayed.

Seinfeld: Are there keys to a plane? Maybe that's what those delays are sometimes, when you're just sitting there at the gate. Maybe the pilot sits up there in the cockpit going, "Oh, I don't believe this. Dammit...I did it again." They tell you it's something mechanical because they don't want to come on the P.A. system, "Ladies and gentlemen, we're going to be delayed here on the ground for a while. I uh...Oh, God this is so embarrassing...I, I left the keys to the plane in my apartment. They're in this big ashtray by the front door. I'm sorry, I'll run back and get them." ("The Keys")

Seinfeld: Seems to me the basic conflict between men and women, sexually, is that men are like firemen. To men, sex is an emergency, and no matter what we're doing we can be ready in two minutes. Women, on the other hand, are like fire. They're very exciting, but the conditions have to be exactly right for it to occur. ("Sein Language")

Okay then, so nice speaking with you, looking forward to the performance, yada, yada, yada...

Seinfeld: This woman is bending my mind into a pretzel. ("The Pie")