February 06, 2009 at 3:20 AM
comment
My personal cheeseball this off-season, the man they call Sheets, is going under the knife.

The Texas Rangers apparently discovered a tear in the flexor tendon of his throwing arm when performing the mandatory physical required for a contract to be finalized. Now the deal is dead, and Ben Sheets is headed for surgery.
I really hate to see this, both from the perspective of ordinary sympathy for a fellow human being and that of a fan who thought Sheets could be a significant asset to his favorite team. I've been stumping for Sheets left and right for quite a while now; I suppose I'm going to have to find some other cause to attach my energy to.
What is really interesting about this story, though, is the question of just who is going to pay for Sheets' surgery. Ordinarily, any medical costs, including surgeries, are the responsibility of the team the player plays for. However, since Sheets is a free agent, the Milwaukee Brewers are understandably hesitant to cough up the cash for him to get his bum wing repaired.

Making this situation even more complicated is the issue of the draft pick at stake. Often times in the past, when a player was going to have to have surgery, a team would sign him to a contract anyway, usually something on the order of one year at a very low salary, plus an option for a second year. The option year would usually also be a very low base, with lots of incentives built in, things like number of appearances or innings pitched.

The theory was that you paid for the surgery and paid the guy to rehab, then would get a year or more at a decent discount. The small financial figures involved kept it from being too risky, while allowing the pitcher to enjoy a decent payday if he came back healthy.

It was a good tactic; the Cardinals acquired Chris Carpenter before the 2003 season on just such a deal, though the contract they gave Carpenter actually lacked an option year. They did something similar a couple of years later with a draftee by the name of Kenny Maiques, who found out he was going to have to have Tommy John surgery days before the 2005 draft. The Cards selected him in a later round, offered to pay for the surgery, and ended up with a talented pitcher for much less than they would have had to pay if he had been healthy.
There's a problem with that approach, though. The problem is that Mr. Sheets is a Type A free agent, meaning that any team who signed him would have to give up their first-round draft pick this year (or their second-rounder if the team in question would pick in the top fifteen), making the cost of signing Ben Sheets much more than just the money. There is absolutely no way that a team is going to give up a first-round pick to sign a guy who won't even think about throwing until at least mid-season, and probably quite a bit later than that. It just wouldn't make any sense.
So what we have is a very interesting guinea pig.
We have: 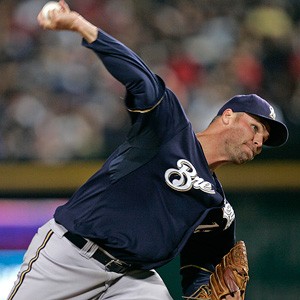 Of course, Sheets could just pay for his own procedure, but that doesn't seem all that likely. Most likely, Milwaukee will pay for the surgery (I'm not sure how much this sort of thing costs, but from a practical standpoint, I would bet it's a drop in the bucket for an MLB organization), Sheets will sign somewhere else in late summer, and everyone will go their own way at least reasonably happy.
The other option, and, frankly, the one I'm kind of hoping for, is that Milwaukee refuses to pay, and Sheets files a worker's compensation claim.

I think it would be fascinating to see if the burden of injury was placed on the team the player was playing for when the damage occurred. It would seem as if it would, to me at least.

Technically, I suppose, there's also the option that a team really does think so little of draft picks (Brian Sabean and San Francisco, I'm looking in your direction), that they would be willing to give Sheets a contract anyway, and damn the consequences. Personally, though, I just don't see that happening.
Regardless of how all this ends, I'm just sad that Ben Sheets isn't going to be wearing Cardinal red any time soon. Sad, too. I don't know what I'm going to obsess about now.