How Larry Bigbie Became the Most Important Man in Baseball

February 05, 2009 at 12:14 PM
comment
Hey, you guys remember Larry Bigbie? No? Outfielder? Played a little for the Cards one year, actually? He got hurt quite a bit. No, never really made it big. Oh, yeah, plenty talented; just didn't quite seem to ever get the breaks to fall his way, you know?
No, that's Kerry Robinson. Bigbie was a white guy. Bigger than Robinson, too. Actually, no, he didn't have as cool a walk-off as Kerry did in '03 off the Cubs. We traded Ray King for him! No? Still don't remember? Well, maybe a little memory refreshment is in order.
The year was 2006. The place was Florida. St. Louis Cardinals spring training camp, to be exact. And taking the field for the Redbirds that spring was an outfielder by the name of Larry Bigbie.
Bigbie had come to the Cardinals by way of a trade with Colorado. Aaron Miles was sent along with him in exchange for Ray King, who had worn out his welcome with both the Cards' skipper and the fan base. At the time, Miles was seen as a mere throw-in; Bigbie was the guy the Cardinals really wanted.
Not to say that Bigbie was big time, by any means. He had had trouble sticking in the majors, and was hearing the word "bust" being thrown in his general direction quite a lot. Talented enough to have been a first round pick of the Baltimore Orioles, Bigbie had nonetheless failed to develop his considerable athletic gifts into on-field production. 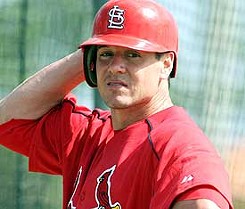 At the time, I was really excited about Bigbie. Former big-time prospect, terrible luck with injuries, simply hadn't quite managed to put it all together.

"Maybe," I thought, "this is just the fresh start that Bigbie needs to finally turn the corner. Dude's still plenty young; if he stays healthy, he just might be what this team needs in the outfield."
Well, things didn't work out quite like that for Larry Bigbie that year. He got hurt in spring training and ended up taking exactly 25 at-bats for the Cardinals. Chris Duncan ended up being just what the Cards were looking for in the outfield (well, technically, he was what they were looking for at the plate; in the field, well...), Aaron Miles grabbed part of a time share at second base ('06 was also the spring of Junior Spivey), becoming the important piece of the Ray King deal, and there was the little matter of a title run that came pretty much out of nowhere.
After the '06 season, Bigbie went his way, and the Cardinals went theirs. Larry Bigbie was relegated to a footnote in the history books of a championship season.
But as Paul Harvey will tell you, there's always a rest of the story.
See, back when Larry Bigbie was a member of the Baltimore Orioles, he befriended a man by the name of Mike Bogdan. Mr. Bogdan was known to Bigbie, and most of the other Orioles players, as a pretty good guy to be around. He hung out in the locker room, was friendly with all the players, and just basically enjoyed all the perks of being among a very, very privileged group. There was one little thing about Bogdan that none of the players knew, though.
According to a probe by The Smoking Gun, Mike Bogdan was an FBI informant. In fact, Bogdan would become the informant as far as baseball was concerned; the man who would lead the Feds to the steroid ring that eventually netted them Kirk Radomski, Brian McNamee, and, of course, Roger Clemens.
See, Bogdan just happened to have been convicted a couple years earlier of real estate fraud. In order to avoid a stretch in the 'pen, he turned informant for the FBI, feeding them information about various other individuals involved in the world of conning real estate.
That all changed when Bogdan met Larry Bigbie. Once the two men were friends, Bogdan fell into the life of hanger-on to various athletes. And, of course, when one hangs out with professional athletes all day long, one is eventually going to encounter steroids. For Bogdan, that day came in early 2005, when Bigbie told him of using performance-enhancing drugs. Bogdan went to his handlers, told them what he heard, and stopped Mike Bogdan, real estate scam narc. He suddenly became Mike Bogdan, steroid narc.
The rest of the story, of course, is perfectly predictable. Bogdan was already informing on his associates and friends; Bigbie simply became the latest acquaintance to be ratted out. Bogdan went so far as to take a used syringe out of Bigbie's trash, to provide the FBI with physical proof of wrongdoing. From Bigbie, the trail led to Kirk Radomski, the trainer who supplied Bigbie with both steroids and HGH, then on to other trainers and distributors, including Brian McNamee, who just so happened to be the trainer for Roger Clemens and his dear friend Andy Pettitte.
Overall, Radomski proved to be the biggest bust of the entire steroid crackdown; the information he supplied to the government has been vital in the arrests and seizures and investigation that has gone on since. There had been BALCO before, but BALCO was problematic, with its egotistical, difficult founder and exotic formulas of steroids and derivatives. Radomski was a clear doorway into the steroid culture in professional sports.
So by the time spring training of 2006 rolled around, Larry Bigbie wasn't just an outfielder who, "might be important if he stays healthy." He was already the most important player in all of baseball, the man who had heard the wolf howling at the door, thought it to be just the wind, and made the mistake of opening up.
And really, wasn't this always the way it was going to be? The star players who did so much, the Barry Bondses and the Big Macs, they became the public face of the steroid epidemic in baseball, yet the player who best represents the era might just be the domino that fell first.

Larry Bigbie wasn't a star player trying to hit more home runs than anyone else ever had, or a future Hall of Fame pitcher trying to keep that edge he had possessed his entire career. Larry Bigbie was a struggling major leaguer; a genuinely talented ballplayer who needed just that little bit extra to try and make it big. The guy who watched as the players around him took the opportunities that should have been his, if only he weren't stuck on the bench with a sore hammy.
For better or for worse, the real face of the steroid era in baseball should be Larry Bigbie, and all the players like him. Not the face of a villain, or the face of pure, unabashed greed, but the face of a player desperate to try and live out his dream. The face of a guy with just a few hundred big league at-bats, and only marginal success in those. The face of a guy from rural Indiana. Not a big fish at all, really; just a guy who did what he thought he had to do to try and grab back the game he saw passing him by.
Hey, you guys remember Larry Bigbie? No? Well, he used to be the most important man in baseball, you know.