February 04, 2009 at 1:12 PM
comment
The coaching staff under new Rams Head Coach Steve Spagnuolo staff is almost assembled, as the Rams announced yet another wave of hires on Monday.
I'll be honest with you; I don't really know much of anything about any of those guys. I am happy to see the new coaching staff take shape relatively quickly, as that will hopefully allow the staff and the front office to start focusing on the draft sooner rather than later.

Teams like Kansas City and Oakland, both of whom are just now beginning to sort out their own coaching vacancies, are going to find themselves shortly falling behind, methinks. Like I said, though, I don't really know any of these guys, so apart from applauding the quickness of the decisions, I really can't make any other sort of educated judgment. 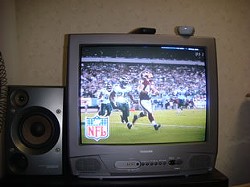 There is, however, one name amongst this newest group of hires that stands out to me, and that name is Matt House.
No, no, don't feel bad. I don't know who Matt House is either. Never heard of the guy. So why, I can hear you asking your computer screen, is Matt House the one name that really stands out to me of this group? Because of his new job title.
Matt House is the new defensive quality-control coach for the Rams.
Okay, one quick question.
What in the hell is a defensive quality-control coach?

For that matter, is there such a thing as an offensive quality control coach? If so, what the hell is that?
I envision a guy who comes around to practice every once in a while and starts feeling up the players, sort of like they do at dog shows and stuff. Get the hand down under their haunches, really try to get a feel for the muscle tone, that sort of thing. Or maybe a guy who just randomly picks a play out of the playbook every so often, then tries it out on Madden to see if it works. Or maybe he grinds up some of the playbook, then smokes it to see how pure it is. I really have no idea.
Really? Quality control?

Maybe one of my astute readers can clue me in here, because I'm really pretty confused. I would think that, between the head coach, and the coordinators, and their assistants, and the legions of position coaches, that someone, somewhere along the line would be responsible for the actual quality of the product.

Apparently, though, I'm just not getting it. I mean, I still don't know what a bench coach does in baseball, but at least he may have to take over at some point if the manager gets kicked out. But quality control?
Okay, so maybe I'm exaggerating here.

According to Steve from All Experts, a defensive quality control coach is primarily responsible for breaking down opponent's game film. Well, okay, I guess that could be it, but then why wouldn't he be called a Films Coach, or Video Coach, or something more along those lines? I smell a cover up here... Or maybe I should be focusing on the "practice assistant" portion of Steve's answer. That sounds more like it. Practice assistant... yeah. Hmm, maybe he serves as a tackling dummy periodically?
So congratulations to Mr. House on his new position, even if I'm fairly suspicious that it may be a made-up job. And if any readers, or even Mr. House himself, would like to explain to me exactly what a quality-control coach does, I would greatly appreciate the info. And don't give me the video thing, because I know better. I'm on to you people.