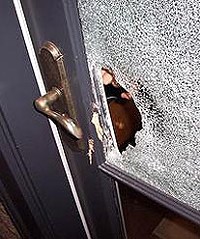 This just in from KMOV (Channel 4). Burglars have once again targeted businesses for flat-screen televisions. The news station states that thieves smashed a glass door at a Rent-A-Center in the 7100 block of Page in Pagedale and made off with five TVs early this morning.

Last month, the St. Louis Police Department held a press conference to alert the public to some 15 smash-and-run burglaries in the city targeting flat-screen televisions. Among the victims in that crime spree were rapper Nelly's Skybox nightclub and F15teen, the restaurant co-owned by former Cardinals ballplayer Jim Edmonds.