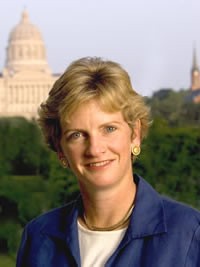 Missouri's Secretary of State Robin Carnahan announced her intent this morning to replace Republican Christopher "Kit" Bond as a U.S. Senator for Missouri.

Last month Bond told Missouri legislators that he would not seek re-election for a fifth term in 2010. Carnahan, a Democrat, broke news of her Senate bid on her Web site. As has become de rigueur for politicians these days, the announcement also included a YouTube clip.

Carnahan's brother, Russ Carnahan, currently serves in Washington D.C. as a congressman representing Missouri's 3rd District. Their father, Mel Carnahan, was a two-term governor of Missouri who died in a plane crash while campaigning for the U.S. Senate in 2000. Carnahan won the election posthumously over John Ashcroft. His widow, Jean Carnahan, served in his place in the Senate from 2001 to 2002.

All of which is to say ... the Carnahans are an extremely political clan and Robin's bid for Senate is hardly surprising.