Though probably not in the Midwest. 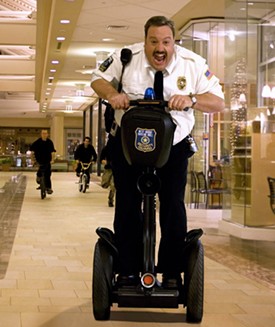 We say that after reading a story in the January 29 Los Angeles Times (which, yes, we also catch up on on slow news days) about how the top (OK, the only) movie on our see-if-we-ever-get-around-to-it list, the critically maligned Paul Blart: Mall Cop, is doing way better than expected at the box office.

LAT writer John Horn informs us that Sony Pictures, which bankrolled Mall Cop, predicted that the film would draw $20 million to $25 million over its first weekend (January 16), then slip the industry-standard 50 percent the following weekend.

Instead the Adam Sandler-produced comedy -- whose nifty website, www.paulblartmallcop.com, is worth a visit -- snagged the top spot when it opened, grossing $39.2M over the MLK weekend, then dropped only 32 percent en route to a second consecutive number-one over the weekend that followed. (Liam Neeson's Taken nudged Blart into the second spot this past weekend.)

All that caught Unreal's eye, not least because we fancy the, shall we say, broad thespiatonic abilities of Blart's star, Kevin James.

What didn't catch our eye was reporter Horn's blather about how "[t]he film's success says less about the fallibility of tracking surveys than it does about audience demand for feel-good stories and Hollywood's growing appetite for low-budget comedies with obvious marketing hooks."

Yeah, yeah, yeah. But our eyebrow went back up a notch when Horn, after reeling off Sony's marketing strategy for Blart -- "In addition to placing a 'Mall Cop' trailer on almost every print of Sandler's Christmas comedy, 'Bedtime Stories,' Sony also bought television spots that reached adults, especially sports broadcasts such as NBA games and the NFL playoffs. Sony's promotions team flooded shopping malls nationwide the day after Thanksgiving, dressing up as mall cops and helping shoppers carry bags to their cars..." -- noted that "the film played surprisingly well outside of major cities" and quoted Sony Pictures Entertainment vice chairman Jeff Blake thusly:

"It did proportionally even better

in the middle of America than it did

in Los Angeles and New York....

There's an audience that maybe

isn't all involved in the Oscar movies."

Wethinks Blake is saying precisely that, though in point of fact it's Doug Belgrad, the Sony production executive who developed the movie with James, who puts the sentiment into words:


"People see themselves in this guy," Belgrad says of James' ne'er-do-well shopping mall security guard, who foils a band of thieves who invade the mall he patrols on his Segway. "They love it when a guy who isn't given credit for being good at anything succeeds."

We have a message in to our friends at Wehrenberg Theatres, inquiring into whether seats for Blart have been filled with ignorant lard asses -- and whether they can maybe set aside a free pass for Unreal's.

Apropos of Nothing Community Media Unreal