About that Eco-Friendly* Super Bowl T-Shirt: Can You Smoke It? 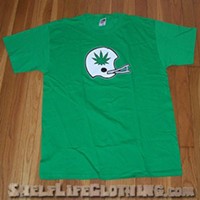 You know the green movement has become nothing more than a shallow marketing tool when the National Football League adopts it for the benefit of selling T-shirts.

Yes, the NFL. The league that brought excess and bling to new levels. The league whose wanton devotion to consumerism has made its television commercials as big as the game itself. The league whose carbon-footprint from tailgaters, stadium waste and jet fuel can make the slums of Mumbai look as fresh and clean as a rain forest.

Yes, that NFL, is now selling Eco-Friendly* Super Bowl T-shirts. The league began pitching the swag last night, just minutes after the Pittsburgh Steelers clinched the championship. For the low, low price of $21.99 Steelers fans can get their very own Reebox Super Bowl XLIII Champions T-Shirt made from organic cotton.

Apparently, though, the unadulterated cotton is in short supply. That's because the T-shirt is the only component of the Super Bowl XLIII Bundle (T-shirt, hat, rally towel and DVD, all for just $89.99!) made from organic products.

But, hey, what I and my good pal (Miami Dolphins running back) Ricky Williams really want to know is this: If we smoke that organic T-shirt, will it get us high?