Somewhere Out There a Vilified St. Louis Schools Superintendent is Smirking 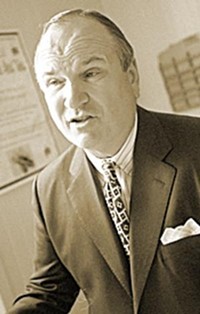 Remember William Roberti, the former Brooks Brothers executive who the city hired in 2003 to fix the St. Louis Public Schools?

Roberti came in and took one look at the city's half-filled classrooms (built when the population of St. Louis was more than double what it is today) and quickly announced the closing of 16 schools.

All told Roberti ended up trimming $80 million from the district's bloated and inefficient budget. But, oh, how he was ridiculed for closing that first batch of schools! St. Louisans never forgave him for it and within 13 months he was driven out of town with a broom.

So, somewhere out there Roberti must be grinning today. That's because the school board recently hired a new consulting group, MGT of America, to access the district's declining enrollment and $36 million budget deficit.

MGT's solution? The district needs to close more schools. This time they're saying 30 must go. C'mon, Roberti just say it. Tell us, "I told you so!"