My Six Questions for Scott Spiezio

January 29, 2009 at 1:03 PM
comment
This morning, on his show on KSLG (1380 AM), Tim McKernan had on Scott Spiezio for an interview. Spiezio, I'm sure you'll all remember, is the red-bearded utilityman who rose to such prominence during the Cardinals' 2006 World Series run.
Spiezio is also the same guy who was released from the team last year after it came to light that he had some pretty serious substance abuse problems, as well as legal issues stemming from an auto accident in Florida, in which he wrecked his neighbor's fence, his neighbor's rug, and his neighbor.
Spiezio talked about getting sober, and his kids, and the fans in St. Louis, and that sort of thing.

But I found myself thinking, "Self, these just aren't the question that I want to have answered. If only there were some way I could publicly communicate the questions that I have! But where could I find such a forum?"
Then, of course, I remember that I am, in fact, a sports columnist, and there was much rejoicing. So these are my questions for the Speezer.

1) So, Scott, how's the band? You guys going to the Grammys this year? Nah, I don't think I would either. Hey, are you planning on suing Scott Ian for copyright infringement, on the whole red beard thing?
2) Are you now, or have you ever been, in possession of any nude or nearly nude pictures of your wife?
3) Could I get a copy of those, by any chance?
4) Oh yeah? Well, what if I were to offer you this tray of vodka shooters? 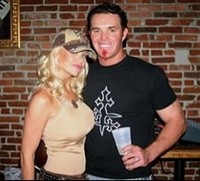 5) Hey, Scott, you remember that time when you hit that triple on the second to last day of the season off Cordero to beat the Brewers and pretty much save the season? That was awesome, man. Oh, you don't remember that? Oh. Sorry, man.
6) Um, Scott? Hey, dude, uh, Scott? Why are you peeing in the corner over there? Dude, come on, we just had that rug dry cleaned! Dude! Not cool! Hey, what are you doing? Scott, get away from me, just let go of-
And then just the sound of dead air. It would have been brilliant, I tell you.
Sorry, Speezer. In all seriousness, glad to hear the guy's healthy and reasonably upright again. We kid because we love, Scott.