Why I'm a Print Journalist... 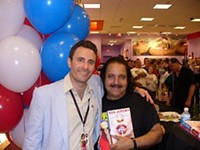 This morning I was again reminded why I choose to toil in the lowly field of print media and not broadcast journalism.

Sure, television reporters earn much more money than we lowly newspaper scribes. And, yes, I certainly have the chiseled good looks to be a TV anchor man, or even a Hollywood star like my friend Ron Jeremy. (That's me, btw, to the left of the Hedgehog).

But the real reason I remain an ink-stained wretch is because at Riverfront Times we don't have to wake up at 3 a.m. during a blizzard to go stand beside a highway.

Yes, this morning as I sat flipping through the channels in my warm and cozy domicile, I couldn't help but crack an evil grin as I watched  those miserable suckers on the local networks. There they were (as cliche as ever) standing on overpasses and hugging the shoulders of the interstate to inform us that -- news flash! -- it snowed last night. And, yes, roads are bad.

I heard a traffic reporter on one of the stations boast that he'd been on the scene since 4:30 this morning. He was actually proud of that! Better yet was when a reporter from KMOV (Channel 4) called into the station from her mobile phone. She must have been in such a rush to report about the snowstorm that she forgot her video camera. So what did she do?

Why she did what any enterprising journalist would do: She held her cell phone out the window of her car so we could listen to what the snow and traffic sounded like. Someone please alert the Emmy committee. The reporter below may have some competition.