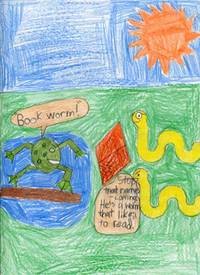 The RFT received a press release this morning which informed us that we are in the midst of No Name-Calling Week. Like snow days and certain Federal holidays, No Name-Calling Week applies mostly to schoolchildren, but everybody could probably do with a little sensitivity training now and then, especially those assholes who wrote "Cubs Suck" in footprints on the Ballpark Village building site.

(Note: This is not name-calling. This is calling a spade a spade. Oh and also? Stay klassy, Cards fans.)

This year marks the fifth anniversary of No Name-Calling Week. It began in 2004, inspired by The Misfits, a children's book by James Howe (who also wrote the now-classic Bunnicula: A Rabbit-Tale of Mystery) about four frequently-maligned seventh graders who run for Student Council on a no name-calling platform and teach their classmates Important Lessons about respecting the individuality of others. This book is fiction, just in case you were wondering.

But the book's publisher, Simon & Schuster, and the Gay, Lesbian and Straight Education Network (GLSEN) thought its message was worth spreading. So for a mere $129.95, you can buy your very own No Name-Calling Week resource kit, which includes posters, stickers, an informational VHS tape, an activities workbook and, oh, yes, a copy of The Misfits.

Alternatively, you could just download the activities and worksheets in PDF form, which is what I did. Just don't call me a cheap bastard. That's not nice and it hurts my feelings. (Even if there may be an element of truth to it.)

There are enough activities to fill an entire week. These include group discussions, role-playing and suggested strategies for dealing with name-calling. There are also worksheets with T-Charts and Venn Diagrams and all sorts of other wondrous learning tools that make modern education so much like corporate training programs without the free bottled water and elaborate buffets.

Five days of discussing the differences between good and bad names should, in the words of the project's organizers, "provide students and educators with the tools and inspiration to launch an on-going dialogue about ways to eliminate name-calling in their communities."

All of which inspires this deep thought: Have these people never dealt with actual children?

Allow me, if you will, to wax philosophical for a moment. To be a child is to be absolutely powerless. You have no legal rights. You have to do whatever grown-ups tell you to. Nobody gives you a choice about anything. The only way you can enforce any sort of control over your environment is by naming things. And, okay, people.

No, the names are not always kind. Yes, feelings can get hurt. But does anyone honestly believe activities that force kids to bond over their love of broccoli or the fact that they ate Frosted Flakes for breakfast are really going to put an end to name-calling forever? Doesn't that sort of belabor the point?

Here is what I learned about name-calling from my junior-high years:
Here is what I have learned since:
Take that, lily-livered, sappy, bleeding-heart losers.

Apropos of Nothing Community