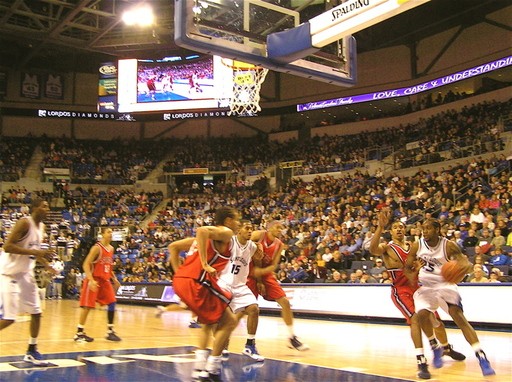 Just when I point out that SLU needs to give "veteran" players like senior Barry Eberhardt and sophomore Paul Eckerle more minutes, a game like the one yesterday against Richmond happens. SLU fought hard in their 70-62 loss, but with freshman point guard Kwamain Mitchell out with a concussion, they never really had a chance.
Not only was Eberhardt completely lost on defense, coach Rick Majerus was forced to give significant minutes to SLU's incredibly inexperienced and overmatched freshmen Kyle Cassity, Brian Conklin, and Brett Thompson. When those three were on the floor along with Kevin Lisch and Paul Eckerle, it looked like a glorified SLU High School game. It was a legitimate white out. 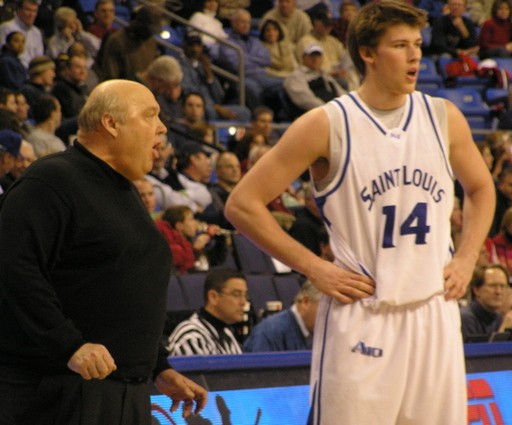 Majerus used to joke about how difficult it was to recruit black players to the University of Utah in Salt Lake City, saying that judging by the skin tone of his players it looked like he was coaching the school's ski team. Yesterday's line-up was Majerus' Ski Team II, and they came tumbling down the slopes like a a blitzed Bodie Miller in the first heat of the slalom.
Cassity in particular struggled to fill Mitchell's shoes. Majerus dogged him for it both during the game and in the press conference afterward where gave the shaggy-haired freshman a not-so-subtle backhanded compliment, "Cassity could be serviceable, a very good back up 1 (point guard) in his junior year."

He also said at one point, "Kyle is going to be a helluva player one year. It's not going to be this year."
That's not exactly a ringing endorsement.
Conklin played the best of the no-tan trio, going 0-3 from the field but drawing enough fouls to shoot 9-10 from the line. Still, he had just three rebounds in 27 minutes.
I have to cut Majerus some slack for this loss; without Mitchell they were completely ineffective on offense. With virtually no dribble penetration they were left settling for contested jump shots or hoping for fouls when they did manage to get the ball into the paint. That, along with Eberhardt's permanent brain fart on defense-- I counted at least three times he left his man with wide open lay-ups--gave SLU their second home loss of the season.
With all the snow falling Sunday afternoon, SLU would have been better off renting snowboards and taking the team for an afternoon at Hidden Valley.
Other observations:
-Though Mitchell was out, he was not completely out of the game. Sitting on the bench wearing street clothes, he was very into the game, often diagraming the opposing team's plays on a whiteboard (see pic below). That's the spirit Majerus has to love in his point guard of the future.

-Against Umass, Tommie Liddell dominated by attacking the rim and drawing fouls. Yesterday he was settling for fade-aways and contested pull-up jumpers, which is why he shot just 4-13 from the field.
-Willie Reed continues to play well. He had a career high 26 minutes and responded with eight rebounds and nine points. But like Eberhardt, he looked overmatched on defense at times.
-The best quote from Majerus after the game about his inexperienced roster: "These guys...they're four years out of eighth grade."