Blues Update: The Light at the End of the Tunnel

January 26, 2009 at 2:02 PM
comment
Over the weekend, we may have finally seen some real reason to be optimistic for the Blues' future. In the NHL's YoungStars Game, the Blues had two players participating, and both showed well for themselves.
Don't get me wrong; there have been plenty of reasons to be optimistic before now, but if you really want a glimpse of what the future of St. Louis hockey may look like, this was as good as it gets.
For those of you who are unfamiliar with the YoungStars game, it's basically just a smaller, kiddie version of the regular All-Star Game. Okay, maybe kiddie isn't the right word here. What you have, though, is two teams, one composed of the best and brightest rookies in the league, and one composed of their sophomore counterparts.

Remember back in gym class, when you would split up by class, then get your ass handed to you in flag football by the juniors, and afterward you would try to hold your shattered collarbone together long enough to get to the nurse's office, while they hung out and smoked and impressed your girlfriend with dirty teenage mustaches, which you could totally grow, it was just that your hair was blond, so nobody noticed, but it was still there, damn it, and just because you barely had any body hair didn't mean you weren't just as much of a man as the rest of those neanderthals, in fact I'll bet none of them have any idea where to find a clitoris, either, but I looked in my anatomy book and I'm pretty sure that I can find it, and then it won't matter if I have a fucking mustache, 'cause I'll be able to...
Whoa. Where the hell am I? Did everything just go bright red for a second there? Huh, that's weird.
So anyway, I was saying that the YoungStars game is kind of like gym class. Freshmen against sophomores. The Blues had one player on each team, Patrik Berglund for the freshman squad, and David Perron for the sophomore team.
Both contributed to their team's respective effort; Berglund scored two goals and added an assist for the victorious freshmen, for a total of three points, while Perron added an assist of his own for the sophomores.

In a way, it was pretty indicative of each player's game; Berglund is fast becoming an all-around threat every time he touches the puck, and Perron, while not putting a whole lot of pucks in the net, is proving to be a playmaker par excellence. Perron, in fact, is beginning to remind me quite a bit of another Blues forward, one who is currently out for the season with a hip injury, Paul Kariya. Perron probably doesn't have the raw speed of a young Kariya, who at his best could probably have given Scott Niedermeyer a run for his money, but Perron does have that same sort of mentality and the vision on the ice to create scoring opportunities for his teammates. Also much like Kariya, I would like to see Perron take the shot himself a little more often when it's there, but I'm certainly not going to complain about what the kid has contributed this season.
As for Berglund, I don't think I could possibly be much more impressed with his performance in his rookie season. He's played in 41 games this year, and has netted fourteen goals to go along with sixteen assists, for a total of 30 points. (Incidentally, 30 is exactly Perron's point total as well, but he's gotten his a little bit differently, with only five goals and 25 assists. Take the shot, David!)

Even more impressive, Berglund is the only Blues player in double digits on the plus side of the +/- ledger. Add up all the other pluses for the Blues, and you get +9; Berglund alone is a +14. It's been an ugly season for the Blues in a lot of ways, with injuries all over the place again this year, but Berglund has been a godsend. Plus, and I'm just putting this out there, kid's pretty good-looking, too. Sort of an Owen Wilson thing going on, except without the broken nose.
It's been really tough to follow the Blues this season. This was supposed to be the year that John Davidson's vision of the future started to break through; instead, the season was torpedoed before it even began, with Erik Johnson, the Blues' young beast of a defenseman, ripping up his knee 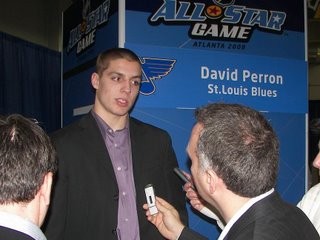 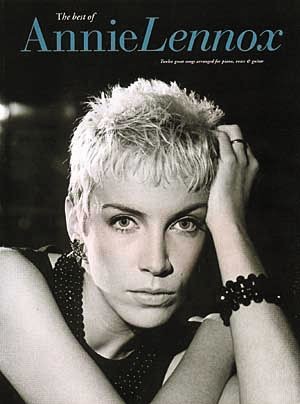