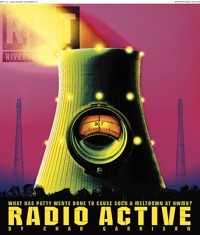 Local NPR affiliate KWMU (90.7 FM) hit another milestone yesterday when Arbitron released its Fall 2008 ratings book. The station reached a record number of listeners between October and December of last year, according to the media audit, with 196,900 people tuning in each week. The listenership earned KWMU a 3.9 percent market share in St. Louis.

The record audience is the second breakthrough the station has earned since the firing of the general manager Patty Wente shortly after a May 2008 RFT cover story revealed fiscal improprieties and allegations of mismanagement at the station. In October the station also reported its best-ever pledge drive, raising $382,000.

In related news, this week marks the arrival of KWMU's new general manager, Tim Eby, who comes to the station from WOSU Public Media in Columbus, Ohio.